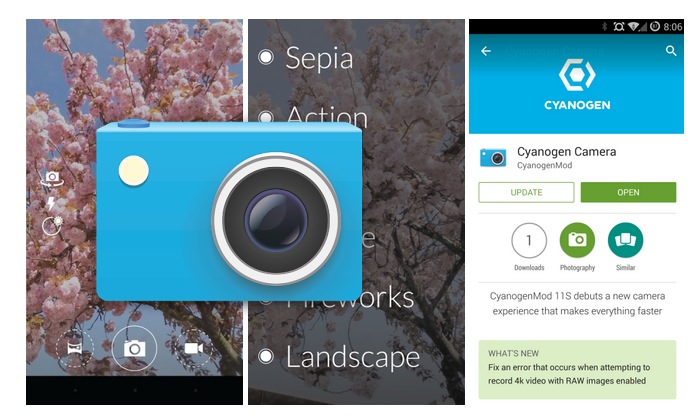 Today the Cyanogen Camera application that is included inside the latest CyanogenMod 11S ROM is now available to download from the Google Play Store.

The CyanogenMod 11S ROM was launched on the OnePlus One smartphone and the new Cyanogen Camera app is now available to update automatically just like any other application from the store.

However if your smartphone is not a OnePlus One running the latest version of CyanogenMod 11S you might be a little disappointed to learn but unfortunately you will not be able to install the Cyanogen Camera app on your Android device. As Cyanogen at the current time have made the new Cyanogen Camera an exclusive to the OnePlus One smartphone.

“Snap photos, record video, and sweep panoramas with a single tap. Plan your perfect image with the quick-access control bar. Once you’ve finished, the new Gallery helps you remember the moment by organizing photos on location and time.”

However in the future it might be made available to other Android devices in the same way that the previous Gallery Next app was opened up to non-CyanogenMod devices after a time of exclusivity. As soon as any more information or launch dates for the rollout onto other Android hardware and operating systems is announced by CyanogenMod we will keep you updated as always.