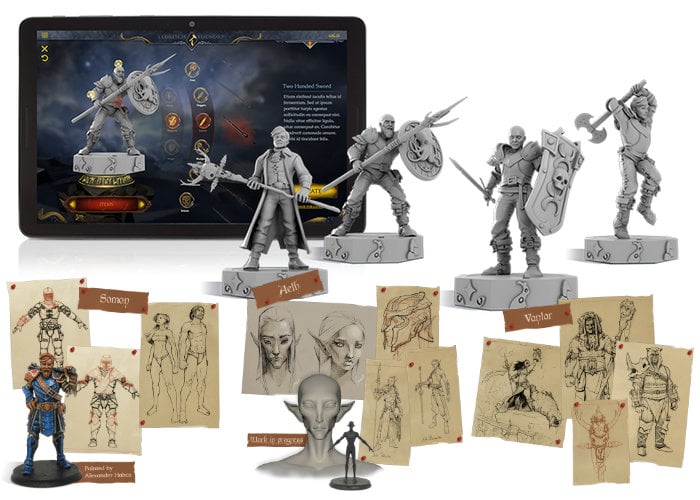 Tabletop gamers wishing to create their very own custom miniature collection might be interested in a Kickstarter crowdfunding campaign which has raised over $380,000 thanks to nearly 5,000 backers. With just five days remaining on its campaign pledges are still available from $39 to be able to create your very own custom miniature. Watch the demonstration video below to learn more about the gaming miniature customisation service and its inspiration.

– Can’t find the perfect miniature for your Dwarven Fighter?
– Are the only miniatures available carrying a broadsword instead of a warhammer?
– Is the figure’s beard too short for your perfect avatar?

“Beholden to the gods of dice and dungeons, Eldritch Foundry brings miniatures from the far reaches of the outer planes. But not any miniatures. Our expert team of Gnome Wizards work tirelessly to bring the most customizable and powerful figures for your character. Our sleek, seamless, flash-less miniatures are unrivaled in appearance and each is blessed by a team of Clerics.”

“Through dark and forbidden rituals, we have given you, the player, the ability to select everything about your character. Complete customization is now in the hands of the player. Whatever hands, head, tail, wings, clothes, weapons, and practically anything else you can think of, we can do. Even the most mundane of coin purses will look amazing on your character – through our high-quality 3D printing.”

The Eldritch Foundry has partnered with the leading US 3D printer manufacturer, 3DSystems, to utilise the most advanced technology available on the market. As such, they are printing at a quality that is substantially higher than anyone else in the market, “We print at about 40% higher definition than anyone else”. For a complete list of all available pledge options jump over to the official Kickstarter campaign page by following the link below.