This month two engineers from the UK have set a new world record for completing the Rubik’s Cube using a Lego based robot they have built, called the Cubestormer 3.

The latest Cubestormer 3 robot set a world setting record of just 3.253 seconds smashing the pervious world record the duo also held of 5.27 seconds. Check out the video after the jump to see in take place, just don’t blink or you might miss it. 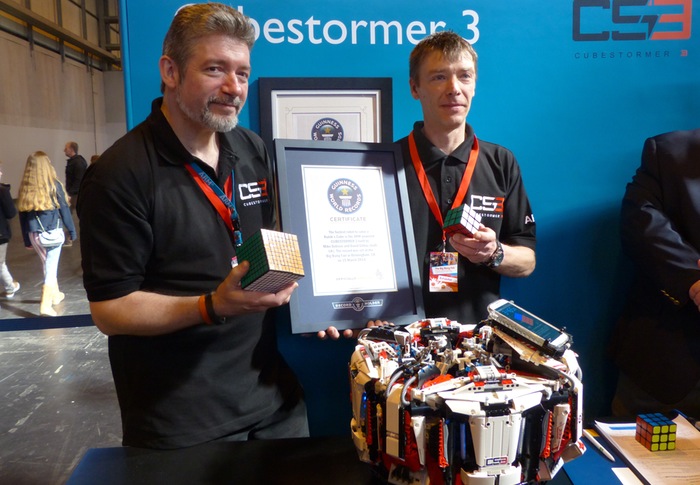 The Cubestormer 3 robot is powered by a Samsung Galaxy S4 smartphone equipped with an Exynos 5 Octa application processor with an eight-core ARM big.LITTLE implementation featuring four Cortex-A15 and four Cortex-A7 processors. David Gilday is a principle engineer at ARM, the world’s leading processor design company based in Cambridge, and co-inventor Mike Dobson, a security systems engineer for Securi-Plex explained :

“We knew CUBESTORMER 3 had the potential to beat the existing record but with the robot performing physical operations quicker than the human eye can see there’s always an element of risk,”-“In the end, the hours we spent perfecting the robot and ensuring its motor and intelligence functions were properly synchronized paid off. Our big challenge now is working out if it’s possible to make it go even faster.”

For more information on the new Cubik Cube record jump over to the Business Wire website for details.