Long story short, this new immersive display from Crescent seeks to eradicate the invisible wall separating gamers from their diversion. That’s pretty basic, as the technology for this dates back at least (by our estimates) 20 years. Of course, its latest incarnation as the Immersive Digital Entertainment headgear is quite an attraction. The event pictured below is the 3D & Virtual Reality Exhibition. 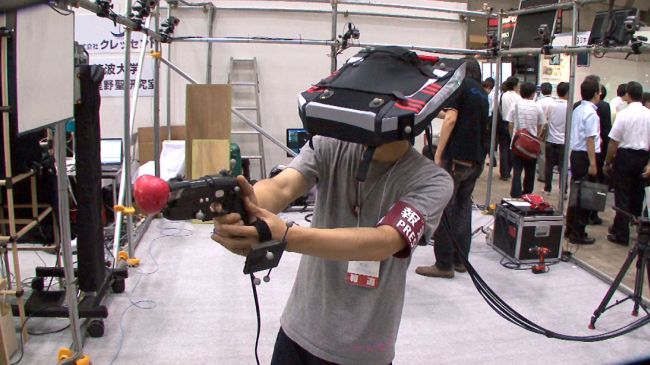 Here’s a clue as to how it can be more than just another gaming platform:

For example, if a new device were combined with this system the images could be made to change rapidly depending on what the user is thinking, so it could be used for relaxation or for biofeedback, as the user could see changes in the image depending on what the user is thinking, and then feel changes in himself. That would be more than a simple game, it would be a new type of entertainment, which is why we wanted to call it Immersive Digital Entertainment.

Actually, despite being avid gamers, we’d beg to skip anything similar to the Immersive Digital Entertainment system. Based on what was mentioned above, it’s a narcotic. Gaming is an incredible cultural experience and an exciting frontier of the imagination. But cripes, we wouldn’t want to get sucked into an immersive game—are we so alienated in this world that a complete and total fabrication is the only antidote left?

Excuse us while we write poetry under a tree.

Now for the video: