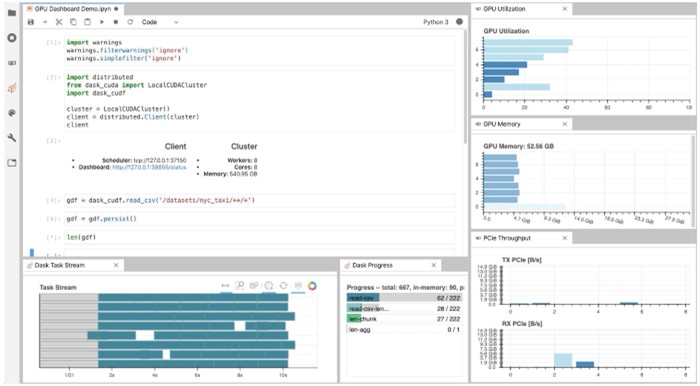 NVIDIA has published a new article detailing how you can create GPU dashboards in the Jupyter Lab. The tutorial has been written by Jacob Tomlinson, Ken Hester and Rick Zamora using the Python programming language together with the awesome Jupyter Notebooks and NVDashboard. The open-source package for the real-time visualization of NVIDIA GPU metrics in interactive Jupyter Lab environments.

“NVDashboard is a great way for all GPU users to monitor system resources. However, it is especially valuable for users of RAPIDS, NVIDIA’s open-source suite of GPU-accelerated data-science software libraries” explains NVIDIA.

“Given the computational intensity of modern data-science algorithms, there are many cases in which GPUs can offer game-changing workflow acceleration. To achieve optimal performance, it is absolutely critical for the underlying software to use system resources effectively. Although acceleration libraries (like cuDNN and RAPIDS) are specifically designed to do the heavy lifting in terms of performance optimization, it can be very useful for both developers and end-users to verify that their software is actually leveraging GPU resources as intended. While this can be accomplished with command-line tools like nvidia-smi, many professional data scientists prefer to use interactive Jupyter notebooks for day-to-day model and workflow development.”

“The package is built upon a Python-based dashboard server, which support the Bokeh visualization library to display and update figures in real time. An additional Jupyter-Lab extension embeds these dashboards as movable windows within an interactive environment. Most GPU metrics are collected through PyNVML, an open-source Python package composing wrappers for the NVIDIA Management Library (NVML). For this reason, the available dashboards can be modified/extended to display any queryable GPU metrics accessible through NVML.”

For more information on creating GPU Dashboards in Jupyter Labjump over to the official NVIDIA developer blog by following the link below.