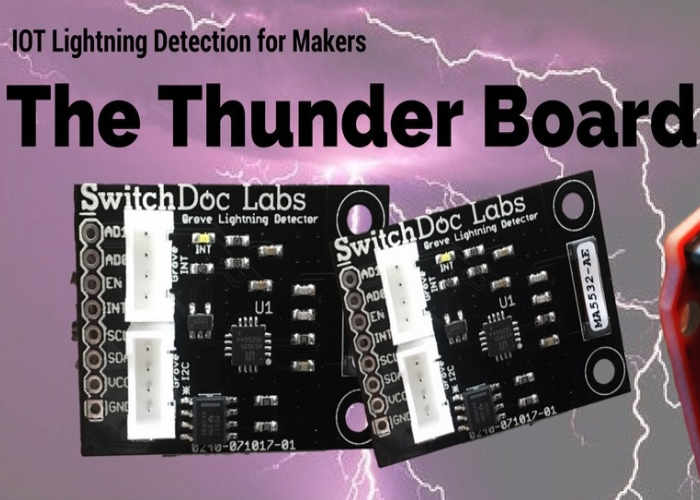 Raspberry Pi or Arduino enthusiasts who are interested in detecting lightning using their mini PC or microcontroller development board may be interested in a new piece of hardware which is being created by SwitchDoc Labs which takes the form of Thunder Board. An Internet of Things lightning detector specifically created for makers that provides both a lightning detector and lightning simulator. Watch the demonstration video below to learn more about the Thunder Board which is launched via Kickstarter.
The unique lightning detector board is available for both Raspberry Pi and Arduino depending on your preference and is capable of detecting lightning either closer or at a distance providing you data accordingly:
– Lightning Strength
– Lightning Count
– Lightning Distance
– Disturber (Electrical Noise) Detection

Lightning and Thunder, Oh My!   This Kickstarter is all about allowing you at home to build an IOT (Internet Of Things) kit, with NO SOLDERING, that will detect lightning and send it up to the Internet.   And more than that, we provide you all the software, parts, great instructions so you can easily customize the kit to match with your computer and your DIY projects. The Thunder Kit is designed for kids 10 and up and especially for adults that want to learn about IOT, software and computer technology.   It is a great project for schools and STEM projects. Put simply, the IOT is about connecting Internet Enabled devices the relay information back to us, to cloud based applications and dashboards and to each other.   These smart devices can be anything from computers, to thermostats, to refrigerators, mobile phones, cars or even big things like jet engines.

Thunder Board is now available to back via Kickstarter with early bird pledges starting from just $23 and delivery expected to take place during December 2017. For full specifications and more information jump over to the official Kickstarter campaign page via the link below.