Fashion abominations are oft birthed by the fevered thinking of fashion designers. It’s a case of arch-haute setters committing the arch-crimes that inspire much grimacing. In an effort to survive the unfortunate event that we really do pollute our air to poisonous levels (as if we weren’t already), designer Hana Marie Newman unveiled this monstrous see through 8 dress as a wearable breathing apparatus. 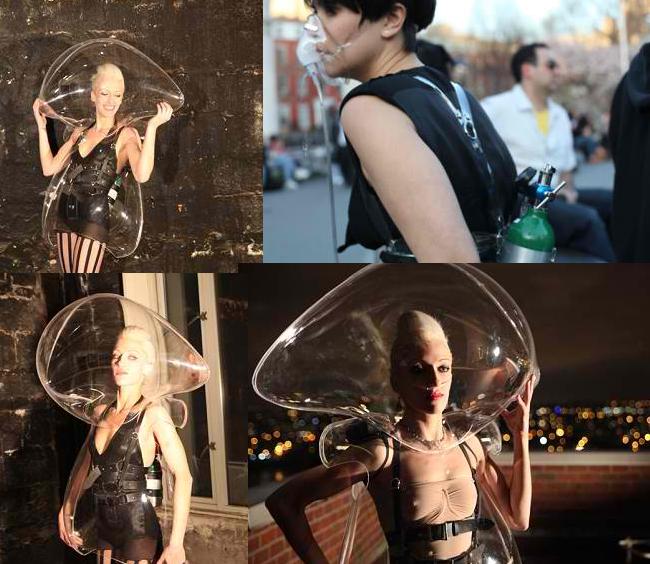 According to her, seen on the top left of the pic up north in a breathing apparatus:

8 challenges inverted quarantine and the response to perceived toxic environments by exposing it’s folly and highlighting the next trend in the green movement with an elegant dress.

8 exposes the wearer while closing her off. It glorifies the oxygen tank and is a constant reminder to the user that she is breathing clean air and to the audience that they are not. It is a catalyst for a larger conversation questioning how what we do individually influences the way we collectively solve problems and raises airwareness.

Airwareness sounds like a word that will catch on soon. Though more than a few bloggers have compared this odd contraption to the less than tasteful outings of Lady Gaga, we like to thinks it’s something along the lines of Fallout meets The Jetsons.