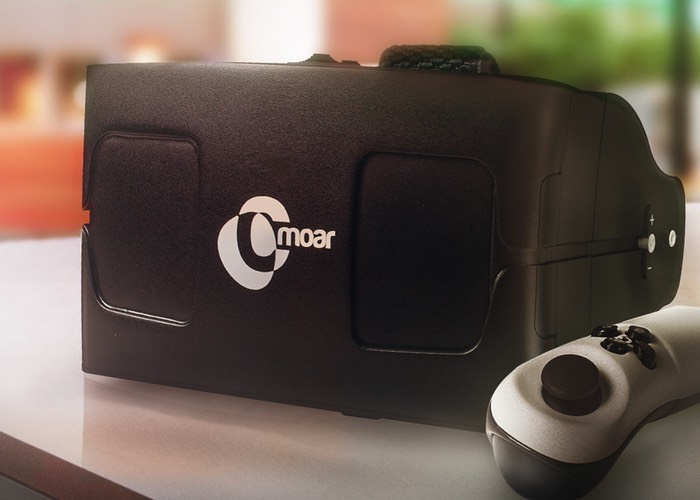 A new virtual reality headset called the Cmoar has launched the Kickstarter crowdfunding website this week and has already passed the halfway point of its $100,000 pledge goal.

The Cmoar virtual reality headset has been designed to be a smartphone powered modular VR headset that includes external sensors and supports both Android and iOS smartphones.

Design to support 4″ to 5.7″ Android and iOS smartphones including the new extra large Apple iPhone 6 Plus the system is capable of providing both augmented and virtual reality. Watch the video below to learn more about the virtual reality headset from its creators, who explain:

“We believe that Virtual and Augmented Reality can change our perception of the surrounding world and open whole new possibilities in terms of both entertainment and education in front of us.

Our major goal was to create the professional headset that apart from being functional, would be also characterized by perfect quality and modern design, additionally enriched with integrated electronics and external sensors. Make yourself familiar with our assets – the ones that others simply don’t have!

Thanks to Cmoar you will be able to expand your iPhone’s capabilities beyond the limits. Cmoar is one of the few headets that is dedicated to such sizeable smartphones. More importantly, the team of our developers creates games and apps for Apple devices to give you even more possibilities.”

For more information on the new Cmoar virtual reality headset jump over to the Kickstarter website for details via the link below and make a pledge from $129.