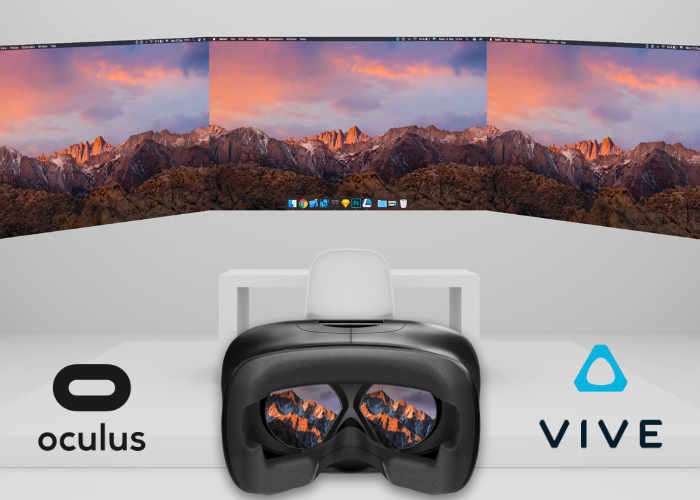 Mac users that also own a Oculus Rift DK2 or one of the newer HTC Vive or Oculus Rift CV1, may be interested in a new virtual reality desktop application which has been specifically created to run on the Apple Mac operating system.

Created by Cindori the VR Mac application currently only supports the older Oculus Rift DK2 virtual reality headset together with macOS 10.11 or later. But support will be rolling out in the near future for the latest HTC Vive or Oculus Rift CV1 headsets says the development team.

The new VR Mac application allows you to interact with your Mac system in VR enabling you to create up to 2 virtual screens and a giant virtual multi-monitor workspace, that works “seamlessly with macOS and third party applications” says Cindori. The application is now available to download as a trial direct from the Cindori website which explains a little more about the VR Mac application :

They said Macs couldn’t run VR. We’re here to prove them wrong. VR Desktop is built with our custom state-of-the-art VR framework to ensure a smooth experience on any modern Mac with a discrete GPU.

VR Desktop is an application that enables you to use macOS together with Virtual Reality headsets. Whether it’s for work or entertainment, VR Desktop takes your computing experience to the next level. Experience your movies inside a grand cinema, or play games on a giant curved screen in space. Whatever you want to do, you’re in control. Play games and watch movies in custom virtual environments.

Jump over to the Cindori website to register your interest and be kept up-to-date with developments as they happen.