In a matter of time, of course. All it takes is a hundred million more Chinese users and wham! The language of Shakespeare is trounced by the language of, uh, Confucius. We’re cool with this. 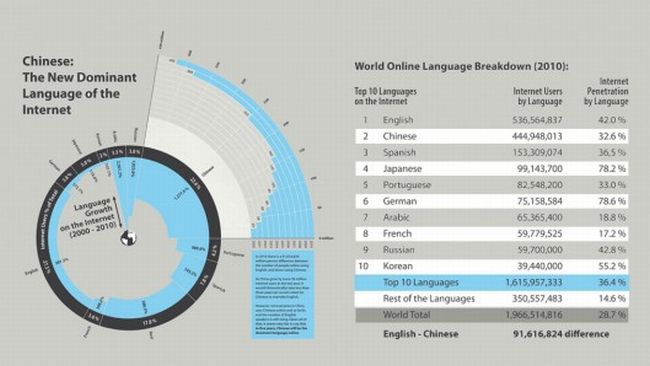 The infographic chart above courtesy of Nextweb has provided the numbers and percentages of the top ten languages that dominate the internet. No surprise that English is number one, but creeping at a rapid pace is Chinese—or should it be Mandarin? Because there are so many dialects spoken in China as it is—trailed by Spanish.

Also obvious is the position of the world’s biggest economies—given slight variations—in the list. However, the total only adds up to 2 billion users. That’s a lot, but certainly not the whole world. There are six billion of us on Planet Earth, right?

What’s quite surprising is Arabic, a veritable lingua franca of the billion-strong Muslim world spread across Asia and Africa, is only seventh. Alas, the tentacles of globalization have yet to reach some distant places.

Despite the expected resurgence of Mandarin as the predominant language on the web, English may still remain top dog if internet use in India skyrockets.

The Chinese government has reacted to this emerging trend with an appropriate piece of legislation called “The National Common Language Law of the PRC” that seeks to preserve the integrity of “Han language” (itself a more appropriate term compared to “Chinese”) in all forms of media, digital and otherwise. At least theirs won’t be corrupted by such asinine phrases as ‘epic fail’ and ‘tea bagged.’