ChatOn recently got a major update that changed the face of the app to make it more appealing to use. The update is being called ChatOn 3.0 and comes with a number of new features along with the facelift.

New features include customizing your profile was a personalized background picture, posting just about anything you want to your friends’ pages, and a new ability to share content directly from Samsung’s LIVEpartners.

The update is only for Samsung Androids though, so all you iPhone users out there can avoid this tidbit of news for now. 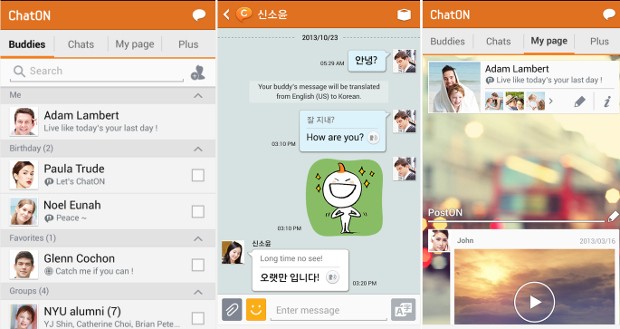 For those who don’t know ChatOn is a mobile messaging app that facilitates group communication and file sharing. After making a new account you can “friend” your contacts like on Facebook and start interacting with them. One of the cooler features on the app is the “trunk” which allows you to see everything that has been sent or received in a group chat, making collaborative efforts much easier than ever before.

The app claims to be the biggest mobile messaging app in the U.S. and Europe, but its primary user base is in China and India. I don’t personally know anyone who uses it. If I want to text plenty of people at once I’ll just use my phone’s standard text messaging feature to do so.

How do you message groups of people at a time?