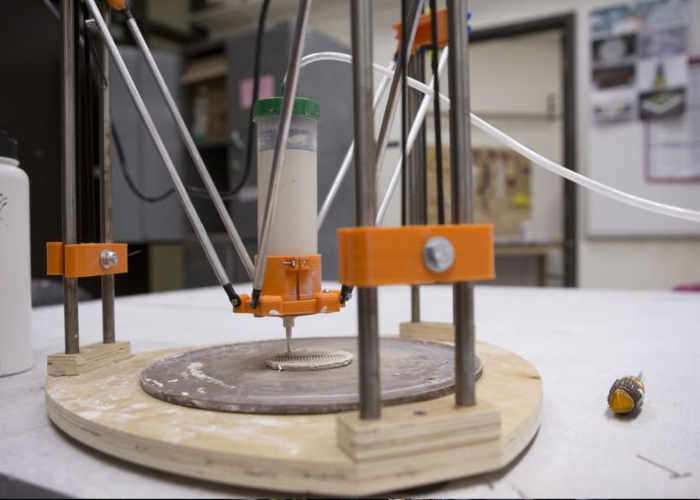 Students at the Rochester Institute of Technology (RIT) have built and programmed a new ceramics 3D printer in just three hours, enabling them to start 3D printing ceramic objects on the same day.

With the help of artist and ceramics professor Bryan Czibesz students have been able to build their very own ceramic 3D printer which can be seen in the image above and program it to start creating designs and generate new ideas.

The 3D print website explains more about the story :

Bryan Czibesz came to RIT to help the department build and program their 3D printer, which they did in a mere three hours. He was impressed not only by the speed and skill with which the students built the printer, but by the artistic ideas they came up with for its use.

“…I love doing these workshops,” he told the RIT Reporter. “I love the contact, the ideas that come and are generated by the presences of people thinking about this machine that can be so abstract. As soon as someone sees something in motion, it reminds them of things. As soon as people see the potential of forms, the potential of the language of the machine – things occur. This is the way new things come. Not all great ideas come out of vacuum – very few do.”

“I try to print them in a way that’s really hands-on, physical,” he said. “The structure is really tenuous, the manipulation needs to happen in order to keep it standing up, I’ve been making additions to it while it’s building…So, it’s something that I can micromanage on the printer as it’s happening. I like that I can tinker with it.”

“I think there is also this tendency to label ceramist as ‘luddites’ or people who don’t embrace technology – but that’s not true,” said Czibesz. “Clay is a really sophisticated and nuanced material technology. But, digital is a new one. And I like how 3D technology kind of bridges the gap, that it’s just one next step on the continuum of making things.”