Devon IT has this week announced the launch of a new Linux-based HDMI stick called the Ceptor they have created aimed specifically at the enterprise market.

The Ceptor is priced at just $99 and has been created to act as a fully fledged PC allowing users to run Windows, Android, Linux or any other operating system of choice. 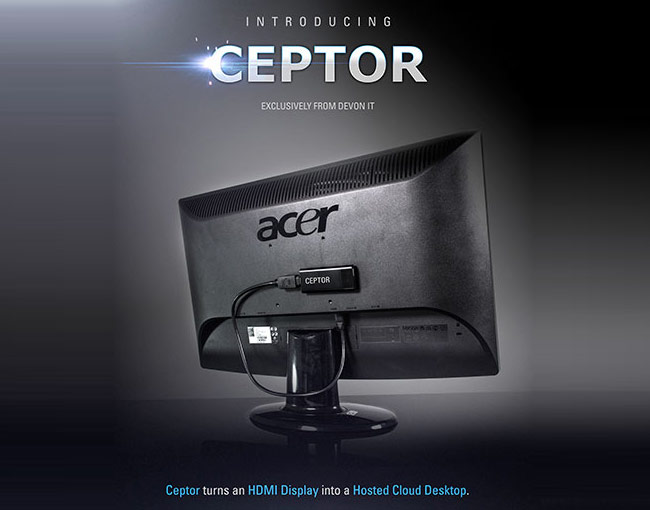 The Ceptor runs the ZeTOS “zero client” Linux-based operating system out of the box but can be hacked to run other if preferred.

Devon IT’s Ceptor HDMI Stick is powered by a 1 GHz Freescale i.MX6 dual-core ARM Cortex-A9 processor supported by 1GB of RAM, and includes up to 32GB of flash storage, together with a HDMI for connection to monitors and the TVs if required.

“Ceptor runs in a stateless condition,” explains Devon IT president Joe Makoid. “Users are unable to execute software or initiate remote sessions that the administrators have not authorized. A user enters their username and password and is immediately up and running in their remote session. Ceptor devices do not broadcast or auto-discover network protocols, eliminating the need for special firewall or routing rules. Since the terminals have no local persistent memory, there are no threats from viruses or malicious software.”

Other features of the Ceptor include 802.11a/b/g/n WiFi, Bluetooth 2.1 connectivity and a USB OTG port. For more information on the new Ceptor jump over to the Devon IT website for details. If you enjoy building Raspberry Pi projects this awesome Raspberry Pi HDMI input add-on might be worth more investigation.