Ages from now, the common citizenry will cherish Dr. Who the same way Shakespeare is cherished today. That’s not saying Dr. Who isn’t cherished by legions of adoring fans right now. Nothing else beats the iconic series in terms of longevity and bad special effects, even utter campyness. Let’s not forget to mention the sheer volume of its reruns. 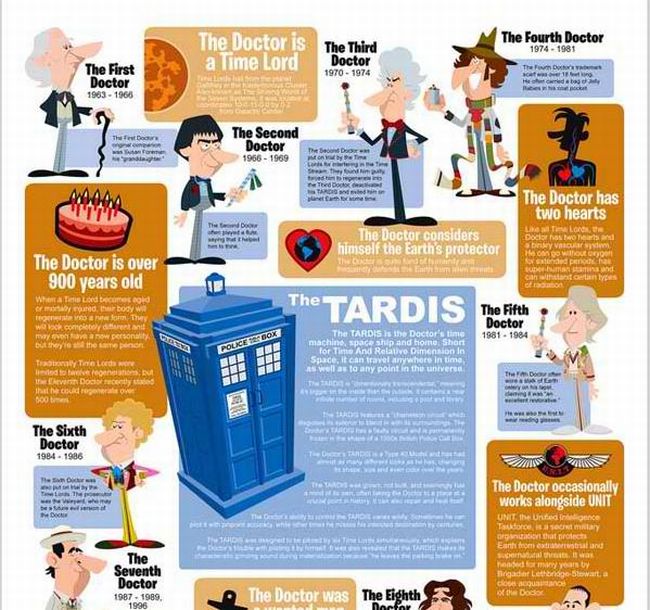 We recently discovered a rather informative graphic at Flickr that charts the entirety of Dr. Who as if it were sacred text. This graphic designer dude named Bob Canada made it and we raise our tea cups to the chap. The graphic is a magnificent piece of work that splendidly explains the whole Dr. Who saga in simple images and words. Mere laymen will be compelled to have a dose of a few episodes after reading it. Also, having a time machine disguised as a Police Call Box at the very center of things is a great introduction.

Bob Canada didn’t miss the other details either. Not the Doctor’s various incarnations plus a brief Time Lord back story. The Sonic Screwdriver is well represented and so is an informative piece on the UNIT agency. Factoids are liberally sprinkled over the visual dish and Dr. Who devotees will be proud t of how their favorite TV show has been captured with such accuracy.

We do wish Bob Canada threw in a Dalek though. Dalek’s are like super-duper-evil and super-duper-awesome at the same time!