Some of our readers might remember the cardboard bike we featured here on Geeky Gadgets back in July of this year. Now in an interview with Reuters designer of the cardboard bike Izhar Gafni, from Israel has revealed that his new invention is very close to being ready for mass production.

When the cardboard bicycle makes it into production it would cost no more than $20 to purchase at retail and costs around $9 per unit to make. 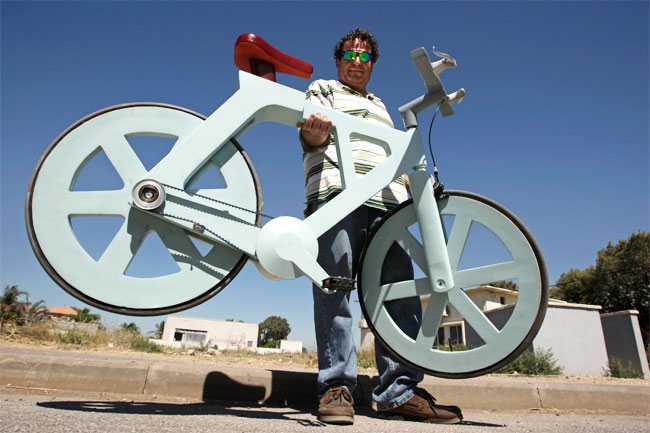 In his interview with Reuters Izhar Gafni explains a little more about the development of his cardboard bike, and how it could help the world’s most congested cities, and the poorest regions of Africa.

“Making a cardboard box is easy and it can be very strong and durable, but to make a bicycle was extremely difficult and I had to find the right way to fold the cardboard in several different directions. It took a year and a half, with lots of testing and failure until I got it right,”

“I was always fascinated by applying unconventional technologies to materials and I did this on several occasions. But this was the culmination of a few things that came together. I worked for four years to cancel out the corrugated cardboard’s weak structural points,”

“In six months we will have completed planning the first production lines for an urban bike which will be assisted by an electric motor, a youth bike which will be a 2/3 size model for children in Africa, a balance bike for youngsters learning to ride, and a wheelchair that a non-profit organisation wants to build with our technology for Africa,”

Designer Izhar Gafni and his business partner Nimrod Elmish, hope to start initial manufacturing in Israel over the coming months on three cardboard bike models, together with a wheelchair design which will be available to purchase within a year, says the team.