In more civilized parts of the world (ahem!), the measure of a man is his calligraphy. Sad to say this particular kind of bragging right is near extinction in this day and age.

That doesn’t mean calligraphy no longer inspires, as shown by Nicholas Hanna’s massive effort to reinvent the water calligraphy genre. The Beijing-based Canadian artists got his hands on a tricycle, an ubiquitous public/private transport in many Asian cities, and tricked it out to suit his needs. 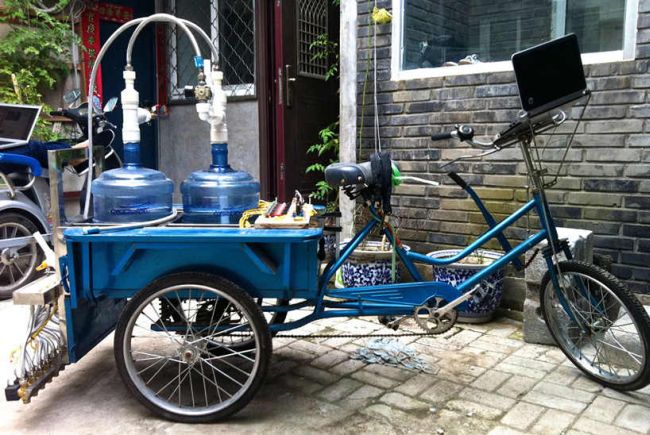 The result is a tricycle that prints strings of calligraphy on streets and alleys. Sure, it will evaporate in minutes (or less), but calligraphy is supposed to be a regenerative art form.

The dot matrix water printing is powered by a row of valves at the rear of the trike. A computer between the handlebars allows Hanna to insert his commands for the specific literary quotations he fancies. He stopped cycling around on October 3, so no more public exhibitions, sadly.

Great, a video to immortalize his achievement: