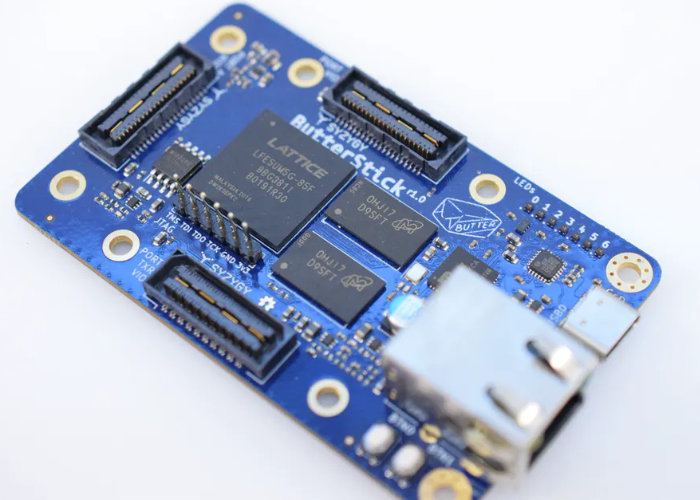 The ButterStick is an ECP5 FPGA-based development board from Greg Davill (also the creator of the Orange Crab). Building from the previously released OrangeCrab, the ButterStick’s primary focus is exposing lots of fast I/O pins. To achieve this goal, the board makes use of the SYZYGY peripheral connector standard. It also features high-speed USB and gigabit Ethernet for high-speed input/output to a computer. Additionally, there is up to 1GB of onboard DDR3 memory.

“Finding a good FPGA development kit can be a tough proposition, especially with all of the different options out there. Some offer little in the way of fast I/O, and others lack small footprints, making them unwieldy. That’s where the ButterStick excels. It features an ECP5 FPGA at its core with some impressive connectivity in a relatively small form factor.”

“The main appeal of this board is the set of SYZYGY connectors onboard, and they allow the kit to connect to an entire ecosystem of ready-made modules that support super fast speeds, similar to MikroE Click Boards.”

“Greg originally had created the OrangeCrab, which was a development board that also featured the same ECP5 FPGA but with the Feather pinout, meaning it lacked much of the fast I/O and connectivity many developers expect when working with FPGAs. So after going through two revisions (r0.1 and r0.2), he finally arrived at the current revision (r1.0). You can also see him solder a prototype together in this video:”