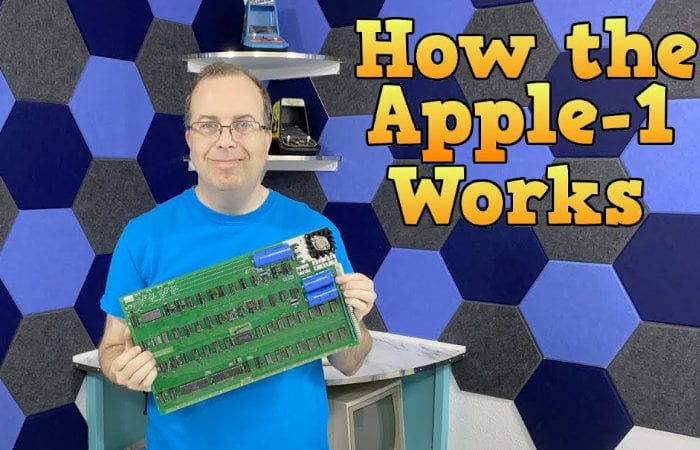 YouTuber the 8-bit guy has taken it upon himself to build an Apple 1 computer from scratch soldiering on every chip and capacitor as well as creating a power brick suitable for the iconic computer. The original Apple 1 computer was designed and built by Steve Wozniak in a garage in partnership with Apple co-founder Steve Jobs back in 1976. The Apple I went on sale in July 1976 at a price of US$666.66, because Wozniak “liked repeating digits” and because of a one-third markup on the $500 wholesale price. About 200 Apple 1 computers were built in their garage, and all but 25 were sold within nine or ten months.

If you would like to read the original Apple 1 computer operating manual jump over to the Retro Place website where it is available together with a video on how a reproduction was created for your reading pleasure.

“The Apple I’s built-in computer terminal circuitry was distinctive. All one needed was a keyboard and a television set. Competing machines such as the Altair 8800 generally were programmed with front-mounted toggle switches and used indicator lights (red LEDs, most commonly) for output, and had to be extended with separate hardware to allow connection to a computer terminal or a teletypewriter machine. This made the Apple I an innovative machine for its day. In April 1977, the price was dropped to $475. It continued to be sold through August 1977, despite the introduction of the Apple II in April 1977, which began shipping in June of that year.”

“In October 1977, the Apple I was officially discontinued and removed from Apple’s price list. As Wozniak was the only person who could answer most customer support questions about the computer, the company offered Apple I owners discounts and trade-ins for Apple IIs to persuade them to return their computers.These recovered boards were then destroyed by Apple, contributing to their rarity today.”