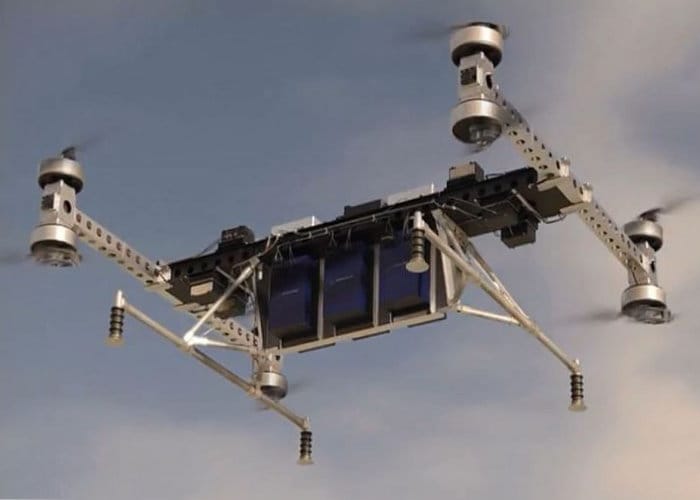 This week Boeing has published a new video teasing their autonomous cargo drone prototype which has been created in just three months and is currently under development to help take autonomous delivery services to the next level. Watch the video below to learn more about the concept and the engineers at Boeing who are currently creating the cargo drone which will hopefully be capable of scaling up to deliver larger packages.

The unmanned cargo air vehicle (CAV) prototype has been created by a team of engineers to its current stage using Boeing’s autonomous technology which the company hopes to use for future aerospace vehicles. As you can see by the cargo drones design the vehicle uses eight propellers two in each corner to provide the extra lift and propulsion required to be able to lift heavier payloads. No specifications on flight times or possible lifting capacities have been revealed by Boeing at the current time, although the current prototype is capable of lifting a weight of 500lbs says Boeing.

It will be interested to see whether Boeing is actually capable of making a viable commercial cargo drone that can autonomously fly from one location to the next and deliver its payload, which businesses or aerospace companies will adopt rather than simply build their own. Unfortunately, no details on if or when the autonomous cargo drone will be ready available for businesses to purchase or use have been divulged by Boeing at the current time, but as soon as more information comes to light we will keep you updated as always.