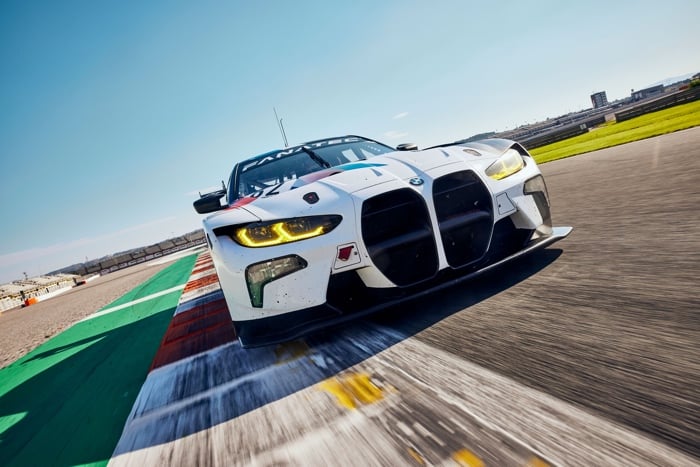 BMW has announced that the BMW M Motorsport teams are testing the new BMW M4 GT3 at Valencia ahead of the 2022 race season.

The first races will be the 24-hour races in Dubai (UAE) and Daytona (USA) in January 2022, more details are below.

It’s only a matter of months until the BMW M4 GT3 will be doing battle for wins and titles around the world as the new flagship in the hands of BMW M Motorsport teams and drivers. The first confirmed highlights will be the 24-hour races in Dubai (UAE) and Daytona (USA) in January 2022. To give the teams and drivers the best possible chance to prepare with the new GT car, BMW M Motorsport organised a week of testing at Valencia (ESP) in October, which was attended by many buyers and interested parties. BMW works drivers Augusto Farfus (BRA) and Jens Klingmann (GER), who have both been heavily involved in the development of the BMW M4 GT3 so are very familiar with the car, taught the guests all about the strengths and special features of the successor to the BMW M6 GT3. After plenty of test laps, the feedback from the BMW M Motorsport teams and drivers was extremely positive. Robert Ravaglia (ITA), DTM Champion and World Touring Car Champion in the BMW M3 E30 and current team manager of the Italian team Ceccato Racing, was impressed after his test drive, and said: “Congratulations to BMW M Motorsport on the development of this car. It was a fantastic experience being allowed to take it for a spin for a couple of laps. After my first few laps in the BMW M3 E30 – the most successful touring car of all time – back in the 1980s, I could tell it was going to be a winning car. And I had the same feeling today. The BMW M4 GT3 is a winning car.”

You can find out more information about the BMW M4 GT3 over at BMW at the link below.