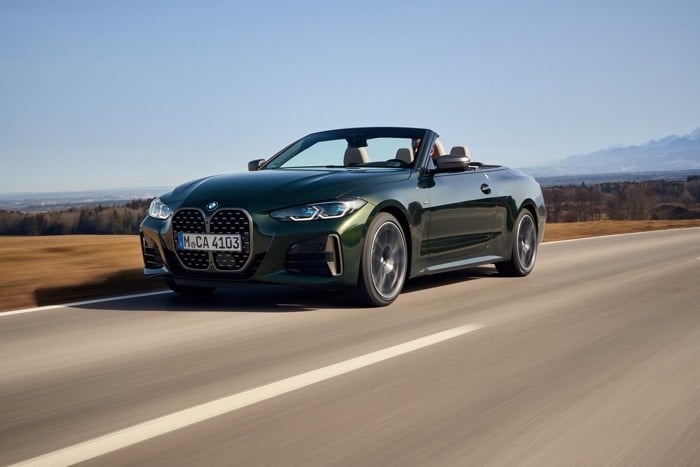 BMW has announced that it is adding three new drive variants to its BMW 4 Series Convertible range, the new models will be available in November.

This will include two new BMW M models and a new all wheel drive model of the 4 Series Convertible, more details below.

The combination of sporty performance and open-air pleasure in a BMW 4 Series model will be enriched even further in autumn 2021. In the new BMW M 440i Convertible (combined fuel consumption: 8.3 – 7.7 l/100 km according to WLTP; combined CO2 emissions: 190 – 175 g/km according to WLTP), a 275 kW/374 hp inline 6-cylinder petrol engine with 48-volt mild hybrid technology ensures particularly purist driving pleasure by transferring its power to the rear wheels. An 8-speed Steptronic sports transmission and an M sports differential in the final drive also contribute to the thrilling driving dynamics as standard. This is reflected, among other things, by accerlation from 0 – 100 km/h from standstill in 5.2 seconds.

An inline 6-cylinder diesel engine and the intelligent BMW xDrive all-wheel drive system make the second new BMW M automobile a thrilling open-top drive. With a peak output of 250 kW/340 hp, a maximum torque of 700 Nm and 48-volt mild hybrid technology, the new BMW M440d xDrive Convertible (combined fuel consumption: 6.6 – 6.0 l/100 km according to WLTP; combined CO2 emissions: 172 – 157 g/km according to WLTP) has impressive pulling power. 5.0 seconds are sufficient for the sprint from 0 to 100 km/h. An 8-speed Steptronic sports transmission and an M sports differential are also standard equipment in this model variant.

You can find out more details about all of the new versions in the BMW 4 Series Convertible  range over at BMW at the link below.