BMW has today announced that its 3 Series automobiles produced in 2012 will now come equipped with a full-colour heads up display (HUD). The heads up display was originally created for use in jet fighters and was designed to provide the pilot with crucial data in an easy to access display which prevented the pilot from being distracted.

The same full-colour heads up display within the 3 Series BMW will provide the driver with data about the car’s speed and navigation in a virtual form in a high-quality resolution within the direct field of vision. 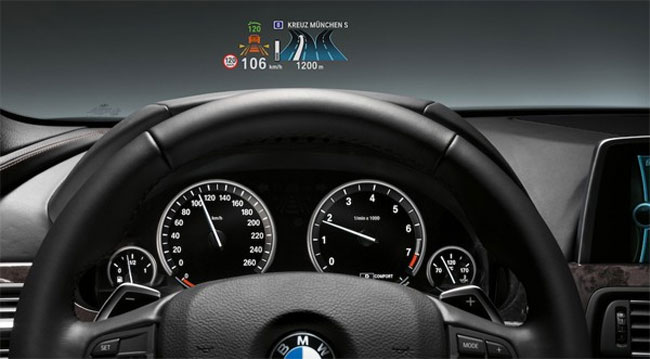 BMW was the first European car manufacturer to adapt head-up display (HUD) technology for use in volume-production vehicles, and since January 2004, HUDs have been an integral part of BMW ConnectedDrive offered for the BMW 5 Series.

A crucial gain in safety as researchers know: A normal driver takes a whole second to read the speed indicator in the instrument panel or to glance at the navigation device. Whilst the driver is distracted, that is without his or her eyes on the road, the vehicle covers a distance of around 14 metres when travelling in urban areas at a speed of 50 km/h – virtually a “blind flight”.

A full-colour head-up display and optionally available for almost all series.