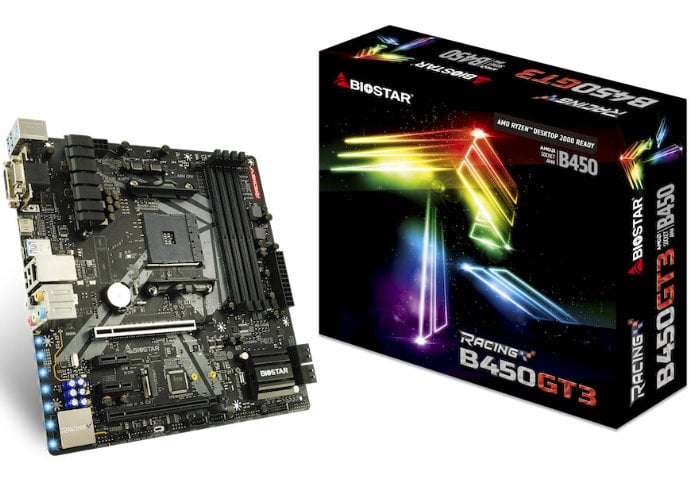 Biostar has introduced a new micro-ATX motherboard this week in the form of the Racing B450GT3, specifically built for gamers requiring a high performance system in a small form factor micro-ATXstyle. Equipped with the B450 chipset supporting AMD’s Ryzen 3000 Series processors the small motherboard is equipped with plenty of functions and features you would expect to find on larger high-end gaming AM4 motherboards says Biostar

“The RACING B450GT3 motherboard is equipped with the exclusive utility FLY.NET, which combined with Realtek RTL8118AS Dragon gaming LAN has the capability to optimise the internet connectivity for a much faster and safer gaming experience. Gamers will also appreciate the Hi-Fi 7.1ch HD Audio for truly immersive sound quality that is enabled with the Realtek ALC1150 7.1-Channel Audio, Dual BIOS for auto-recovery, and Iron Slot Protection for a much more stable and durable port composition. The motherboard also comes equipped with a full array of RGB LIGHTING modes that can be fully managed and customised with the VIVID LED DJ and 5050 LED FUN ZONE software providing complete control of user build customisation.”

Unfortunately, no information on pricing or worldwide availability has been released as yet Biostar, for more specifications and details jump over to the official Biostar website.