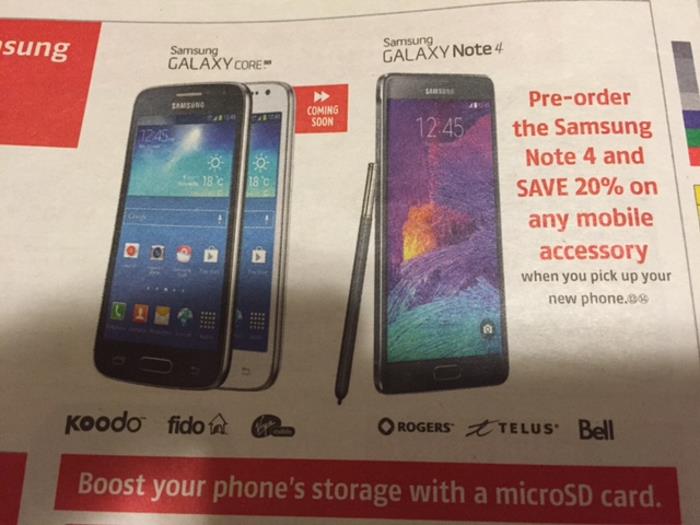 Samsung’s latest phablet, the Galaxy Note 4, is up for pre-orders in Canada at two big retailers in the region, Best Buy and Future Shop.

Customers interested in pre-ordering the phablet on Bell, Telus and Rogers have to visit the specific retailer, and drop a $50 in order to confirm the pre-order.

The flyer, as shown above, doesn’t reveal the shipment date for the handset, but it should begin in mid-October. Samsung has already launched the device in Korea, and is expected to roll out to several markets by the end of October.

Samsung Galaxy Note 4 features a 5.7-inch display boasting a resolution of 2560 by 1440 pixels, a quad-core Snapdragon 805 chipset clocked at 2.7GHz, 3GB of RAM and 32GB of expandable storage with a microSD support of up to 128GB.

There’s a 16MP camera with optical image stabilization, 3.7MP front-facing camera, a 3,220 mAh battery, WiFi, Bluetooth, and runs Android 4.4.4 KitKat as its operating system out of the box. Additionally, the handset also features a heart-rate monitor, as well as the fingerprint sensor under the home button.

All major Canadian carriers have already announced they’re going to add the Samsung Galaxy Note 4 to their product portfolio when it’s launched.

What do you think about the new Samsung Galaxy Note 4?