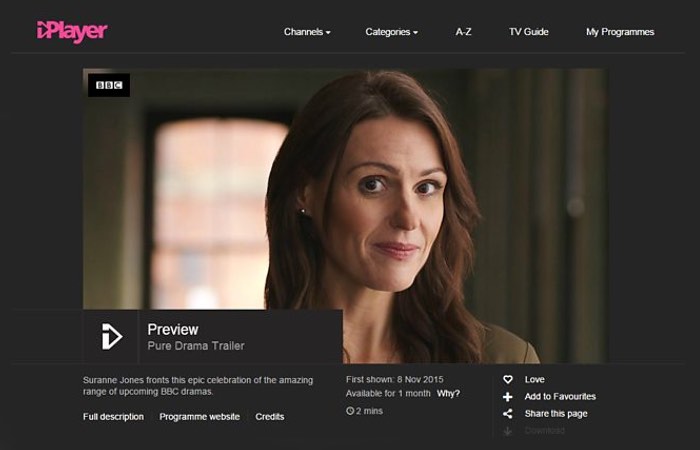 Graham Matthews Senior Product Manager at the BBC has taken to the BBC blog this week to reveal a new initiative from the BBC that will introduce trailers or adverts for other BBC content in front of programmes on the BBC iPlayer service.

The new trailers feature for the popular BBC iPlayer application has been added to help users discover more shows and programs across the range of BBC channels, says the BBC.

Matthews explains more about the inspiration behind the new BBC iPlayer trailers feature and how it will function.

With so many programmes available at one time, one of the challenges is how to make sure you get to hear and find out about BBC programmes you might not otherwise have found – whether it’s that surprising hit comedy, tense drama or action-packed film.

That’s why over the last 12 months, we’ve made trailers available on iPlayer for some of the highlights coming up on the BBC’s TV channels and – of course – on iPlayer itself. From the new series of Sherlock to our Pure Drama trailer staring the incredible Suranne Jones, these have been really popular with the top trailer attracting nearly a million requests.

Given the demand for these trailers on iPlayer, today we’re starting to roll out a new feature that will mean you may see a single short trailer play automatically when you select a programme to watch on iPlayer. It may be obvious to say, but these will be for BBC programmes only. You’ll be able to watch all the trailed shows on iPlayer once they’ve been on TV, and many will already be there on iPlayer – only a click away.

We hope that you’ll enjoy seeing a taster of some of the BBC’s programme highlights, but we’ve also been very keen to ensure that you have control over what trailers you choose to watch. If you’ve seen something before, or you decide it’s just not for you, then there’s a ‘Skip’ option that will take you straight to the programme you’ve selected.

For more information on the new BBC iPlayer trailers that will be available before programs via the service jump over to the official BBC blog for full details for the link below.