The BBC have announced a new feature they have rolled out to their awesome iPlayer service called “Live Restart”. Which has been created to enable users to rewind and restart live TV on the iPlayer without waiting for the programme to end.

The new live TV rewind service will function without the need for you to have been previously watching or recording the BBC TV show. Allowing you to rewind live TV broadcast backwards for up to 2 hours. 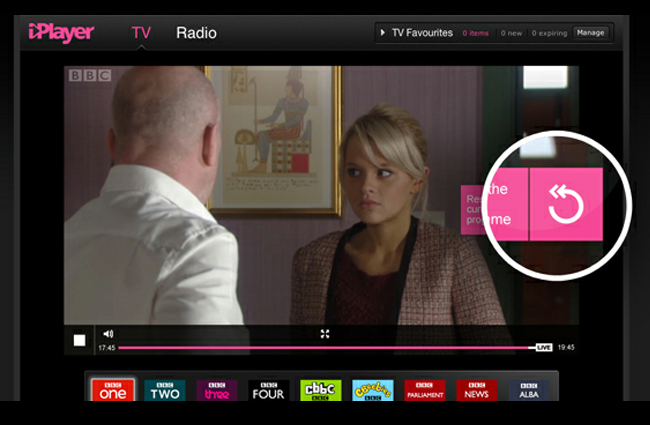 The new iPlayer feature is part of the BBC’s wider strategic plans to embrace HTTP chunked streaming, which is now being used to deliver their online video services. Instead of the point-to-point streaming protocol the BBC has used in the past. Henry Webster the Executive Product Manager in Media Services at the BBC explains:

“So, if you’re stuck in a traffic jam, or delayed on the tube and miss the critical start of your favourite BBC programme when you get in, with one click you can skip back to the beginning of that live programme.

We already use Content Delivery Networks (CDNs) to help us with video delivery, but a move to HTTP streaming means that instead of relying on their capacity to stream video from specialist video servers, we are now able to use their cheaper and more abundant HTTP serving capacity.”

More information on the latest BBC iPlayer Live Restart feature can be found over on the BBC website and blog post, and will prove to be an invaluable feature for users with the upcoming Olympic 2012 games just around the corner.