DICE developers explained in an interview this week that they have been working to accomplish a 60 fps framerate on the new Xbox One and PlayStation 4 consoles, as well as make the Battlefield 4 Commander Mode a great new tool. 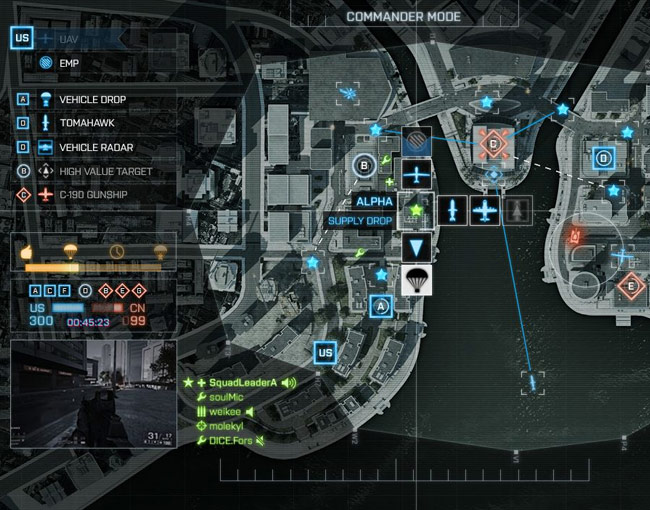 “We have a very complicated game with a lot of moving parts,” Bach said. “We had to decide, yes, we will do this in 60fps. Everything else is secondary. We know the game is great when you have 64 players and destruction, and if we could get what we had on PC for a long time in your living room with a pad, wouldn’t that be amazing? That’s what we’re aiming for.”

The new power included in the next generation consoles has also enabled DICE to up the multiplay console limited to 64 from 24 players.

“They [next-gen console players] will experience another level of chaos they haven’t seen before,” Bach said. “12 versus 12, you can keep track of quite a few people, but only so many. When you get to 32 versus 32, that’s when it becomes hard to keep track of the other team, when it feels like there are more things going on than just around me and what I can control.”

Battlefield 4 Commander Mode a tactical, top-down view of the battlefield, lets one player per side gather intel, issue vehicle and supply drops and go on the offensive by triggering devastating attacks either from PC, console or a tablet. was also explained in more detail by Bach :

“Commander Mode was flawed in Battlefield 2,” -“A lot of people thought it was fun to play, but they also felt it was this thing they could do on the side, like a jump in, jump out experience. Some people felt it ruined their experience on the ground when they had a bad Commander. So we had to fix those design flaws before we started to implement it. We’ve been working on it for some time figuring that out, and I think we’ve got it.”- “So, if I’m a good Commander and I help my team to take flags, I will get more toys to play with,”. Check out the Battlefield 4 Commander Mode trailer released earlier this month below: