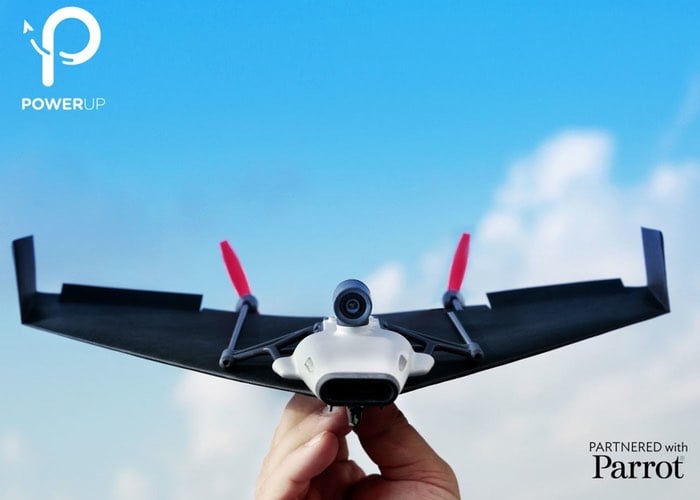 Shai Goitein has partnered with Parrot to create an awesome first person view paper aeroplane drone that is capable of live streaming footage from its on-board camera.

Available to back from $159 the PowerUp FPV live streaming drone has taken to Kickstarter to raise $100,000 to make the jump into production.

Thanks to over 970 backers the team has already blasted past its pledge goal and already raised over $180,000 in just the first couple of days. Watch the promotional video below to learn more about the inspiration behind this awesome camera drone and its design.

It’s a bird. It’s a plane. Well, sort of. It’s you, flying atop your very own paper airplane… It’s PowerUp FPV: the first ever paper airplane drone with a live streaming camera!

PowerUp FPV lets you experience flight as if you were sitting in the cockpit of your very own paper airplane. Wearing your smartphone with a head-mounted display (Cardboard viewer included), you see what your plane sees, controlling your paper drone with intuitive movements of your head.

We teamed up with the leading minds at Parrot® to create the world’s most incredible live streaming technology, giving you the thrill and exhilaration of flying up to 300 feet in the air! Pledge today and join us in experiencing flight like you never have before. It’s about to get real – really, really real – and we hope you come along for the ride!

Jump over to the Kickstarter crowdfunding website to meet a pledge from $159 to be one of the very first to be able to fly this awesome camera drone.