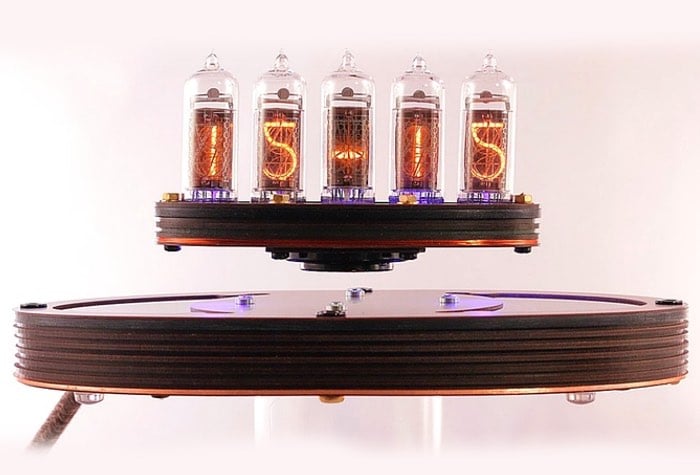 Tony Adams a designer based in Edinburgh, within the UK, has created a very unique timepiece in the form of the levitating Nixie Clock, which he has launched over on Kickstarter this week looking to raise the required £35,000 to take the clock into production.

As you can see from the image above and its name the unique clock face is capable of floating in midair thanks to its magnetic levitation system. Check out the video below to learn more the technology and inspiration behind the nixie clock.

From an early age we are aware of the laws of physics and their effect on how the world around us behaves. If we pick up an object, it has weight. If we place it on another object, such as a table, shelf or the floor, it will rest upon it. If we drop it, it will fall. Even though levitated objects have become increasingly common, there is still the air of magic about them. When the levitated object is radiating energy you know it cannot be generating in itself, the illusion of magic is complete.

May we present the world’s first and only levitated nixie clocks. Once set up correctly it will hover above the base for as long as it is powered, displaying the time and date on digits of glowing metal and glass. Needing no batteries, the nixie clock is powered from the base without wires and will operate without interruption for months or years. No charging is required, it just floats and works.

To own your very own levitating Nixie Clock jump over to Kickstarter to make a pledge from £350 for super early bird backers with shipping expected to take place during November 2016.