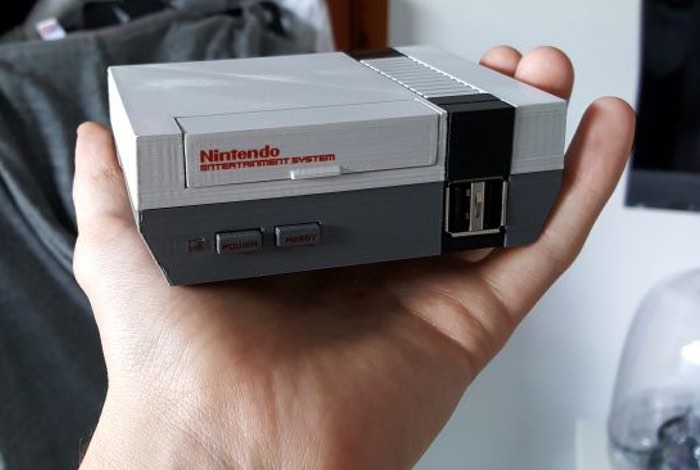 Anyone who can’t wait for Nintendo to launch their official mini NES console, and would like to engage in a little retro gaming. Might be interested in this new awesome DIY mini NES Classic which is powered by Raspberry Pi to and enclosed in a 3D printed case.

The DIY mini NES Classic console also offers a wealth of cool features above and beyond anything that Nintendo is going to release and even includes an NFC card reader.

When Nintendo launches their mini NES later this year, which is now available to preorder priced at $60, the console will only be able to play 30 games and no more will be available to add or load onto the official mini NES console. Unlike the DIY system that has been created by DaftMike who has use the RetroPie emulation software to create his very own. Brad Linder from Liliputing explains more :

The system includes a Raspberry Pi 2 stuffed into a 3D-printed case that’s about 40 percent the size of a real NES. But that’s just the tip of the iceberg. Daftmike modified the layout of the Raspberry Pi by moving two of the USB ports so they’d be accessible on the front of the system, while using the other two for internal WiFi and Bluetooth dongles. An Arduino board has been placed in the case and connected to the status light and an NFC card reader.

Wondering why the system needs NFC? Because he’s also created a series of tiny game cartridges that can be inserted into a slot. Unlike actual NES game cartridges, the games aren’t actually installed on these miniature versions. But there are NFC tags that correspond with the pictures on each cartridge, letting RetroPie know which game to load.

For more information on the new DIY mini NES jump over to the links below.  If you enjoy building Pi projects you might be interested in our comprehensive list of Raspberry Pi displays, HATS and small screens.