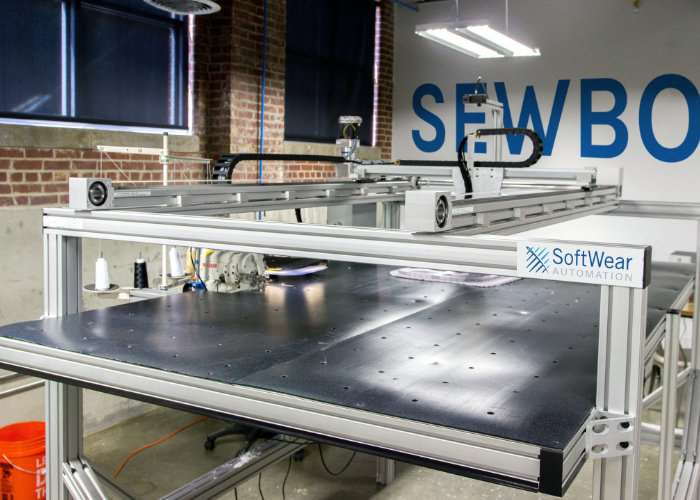 After news of research, SoftWear has unveiled their new automated ultra-fast sewbot which is capable of stitching over 140 T-shirts every hour, guiding the fabric as it moves to make sure the seam stays straight.

Watch the demonstration video below to learn more about the awesome Sewbot and just what it is capable of producing. Softwear explain more about the design and inspiration behind the robotic CNC sewing machine.

Sewing simple items of clothing is one of those repetitive, labor-intensive tasks that seems like it would have been automated ages ago. But getting a robot to do it right is tricky. Fabric stretches, especially the comfy, flexible knits used for t-shirts. A human can easily adjust on the spot, guiding the fabric as it moves around to make sure seams stay straight, but robots aren’t always great at that sort of improvisation.

In 2015, after years of research, SoftWear Automation introduced LOWRY, a sewing robot, or sewbot, that uses machine vision to spot and adjust to distortions in the fabric. Though initially only able to make simple products, such as bath mats, the technology is now advanced enough to make whole t-shirts and much of a pair of jeans. According to the company, it also does it far faster than a human sewing line.

SoftWear Automation’s big selling point is that one of its robotic sewing lines can replace a conventional line of 10 workers and produce about 1,142 t-shirts in an eight-hour period, compared to just 669 for the human sewing line. Another way to look at it is that the robot, working under the guidance of a single human handler, can make as many shirts per hour as about 17 humans.

For more information on the robotic CNC sewing machine jump over to the official Software website.