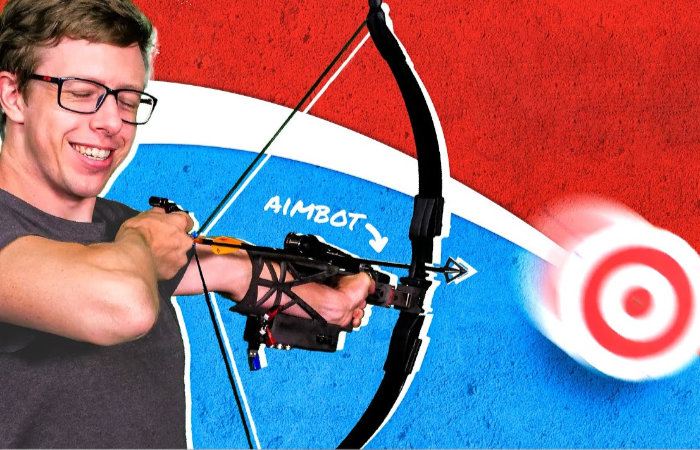 If you are looking for inspiration to engineer your next project or idea, you may be interested in the latest project by the Stuff Made Here YouTube channel where engineer Shane Wighton has created and auto aiming archery bow that hits the target every time. Check out the video below to learn how the automatic archery bow has been created and the technology used to allow it to automatically predict where the target is going to be on moving objects as well as perfectly aim and hit stationary archery targets.

It’s great to see the struggles Wighton encountered while making the also aiming archery bow and the design process during which he brings together all the different components required and keeps tweaking the code to make the bow more and more accurate over time. Competing against his wife as the human element in the testing process, losing at first but eventually tweaking the settings, sensors and auto aim features to eventually achieve the ultimate goal, a fully functional auto aiming archery bow capable of hitting even the smallest of targets.

“I’m Shane and I build things that I think are cool and usually don’t exist. Things like robotic basketball hoops and iPad cases that lets blind people see with their hands. Once I get them working, I share videos about them on YouTube. Behind each video is 100+ hours of work and thousands of dollars of materials and tooling.

By supporting me you enable me to make more, bigger, AWESOMER things. In exchange I’ll be sharing more juicy behind the scenes details on the projects, AMAs, hanging out on discord, and random thoughts from some guy building stuff on the internet. “