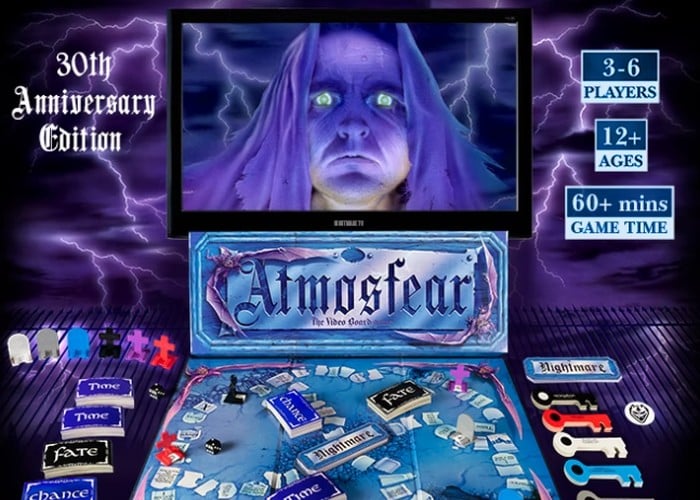 A campaign for the 30th anniversary edition of the Atmosfear video board game is now entering its final 72 hours on Kickstarter after raising over $250,000 thanks to over 3,000 backers. The project has 3 days remaining and offers a chance to play the iconic groundbreaking game combining video and traditional tabletop mechanics.

Check out the promo video below to learn more about what you can expect from the anniversary edition of the game which allows 3 to 6 players to engage in a scary adventure for around 60 minutes. Early bird pledges are now available for the recently launched project from roughly $66 or £49 (depending on current exchange rates).

“This special 30th Anniversary Kickstarter edition of Nightmare/Atmosfear not only pays homage to the origins of this unique video-meets-boardgame experience, it also expands on the original with deluxe game play extras and new custom pieces made especially for this campaign. We are not only re-creating the original game from 30 years ago, we are also refining and improving the original with new playing pieces, extra cards, and incorporating the crazy Baron Samedi expansion. In addition we have commissioned an entirely new and original backstory of The Gatekeeper and his mission on and under the earth called “The Lore of the Other Side” – this will be penned as a graphic novel.”

If the Atmosfear crowd funding campaign successfully raises its required pledge goal and the project completion progresses smoothly, worldwide shipping is expected to take place sometime around December 2022. To learn more about the Atmosfear video board game project view the promotional video below.

“Created circa 1991, ATMOSFEAR™ is the original interactive video board game where three to six very brave (AKA foolish) players take on a video ghoul host – The Gatekeeper – in a game of skill, chance, shocks and laughs. During the game, as you make your way around the board collecting keys, THE GATEKEEPER makes random appearances to bully, insult, reward or punish you; why? Because he can, this is his game, and these are his rules.”

“You never know who is going to win. To play the game, all you’ll need is a copy of our new Anniversary edition game pack, a screen, good speakers and internet access to stream or download the video… oh, and possibly a change of underwear.”

For a complete list of all available special pledges, stretch goals, extra media and specifications for the video board game, jump over to the official Atmosfear crowd funding campaign page by clicking the link below.