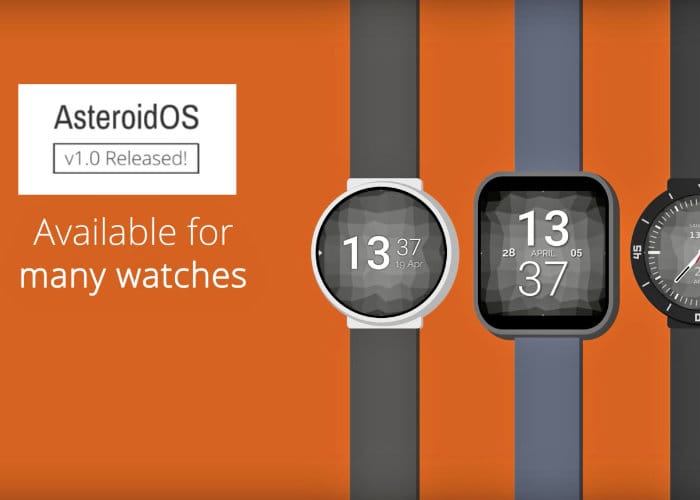 After being in development for a number of years the first release of the new AsteroidOS wearable operating system has been released, providing alternative for Android Wear and supporting a wide variety of Android based smartwatches. Watch the demonstration video below to learn more about the first stable AsteroidOS v1.0 release which is now available to download.

Asteroid OS 1.0 has been created to provide all the features you’d expect of a modern wearable including notifications, agenda, alarm clock, calculator, music remote control, settings customisations, a stopwatch, a timer, and a weather forecast app. The difference between this and other operating systems is that AsteroidOS open-source operating system for smartwatches.

“Four years ago, I envisioned an open-source operating system for smartwatches that would eventually become known as AsteroidOS. This project has steadily grown and gathered contributions from about 100 contributors from all around the world, all united behind the idea of an open wearable platform. When I first started, I never imagined how big this project would become and the quantity of work required to reach a stable version for daily usage.”

A wide variety of smartwatches are currently supported such as the LG G Watch, LG G Watch Urbane, LG G Watch R, Asus Zenwatch 1, Asus Zenwatch 2, Asus Zenwatch 3, and Sony Smartwatch 3 are the initial hardware targets. Additionally, AsteroidOS can run on a software emulator for testing and development. The process of porting AsteroidOS to a new hardware watch is extensively documented on the official website to help anyone expand the list of supported watches, says its developers. For more information jump over to the official Asteroid OS website by following the link below.