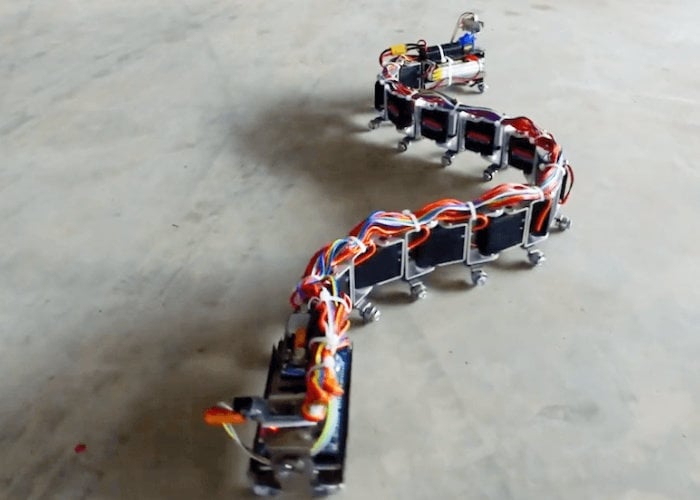 A new robot snake kit has been created by Nevon Project which is powered using the Arduino Mega microcontroller and is equipped with 12 servos for locomotion and to control its 12 segments. The robotic snake kit is powered by a 7.4-volt battery pack and is controlled using the companion Android application via a Bluetooth connection.

The robot snake is also capable of autonomous movement and can be constructed using a variety of different types of servos and brackets. check out the demonstration video below to learn more about the Arduino snake robot equipped with IR vision.

“Each of the 12 segments consists of a servo motor, a C-bracket, a side bracket, a wire clip and a set of Lego wheels. Two screw holes is to be drilled into the Lego wheel axle to permit it to be connected to the C-bracket. After all, 12 segments are connected, head and tail sections need to be added in order to accommodate the Arduino and batteries. To make them a side bracket and two long C-brackets connected. The Arduino and therefore the 5AA battery holder are used that powers it into the tail section of the snake. The servos are powered by a separate supply, the 7.4-volt battery pack, goes into the head of the snake. On the receiver, the bottom pin is connected to the Arduino ground. The voltage pin is connected to a 5-volt pin from the Arduino.”

The Arduino based Snake Robot controlled via the companion Android application Is now available to purchase as three different kits depending on your skill level and required time to completion. The Self Learner kit is priced at $676, with the Ready To Go Kit priced at $580 and the Self Build kit priced at $515. For more details on the Arduino robot snake kit jump over to the official NevemTech website by following the link below.
Source: AB : NP