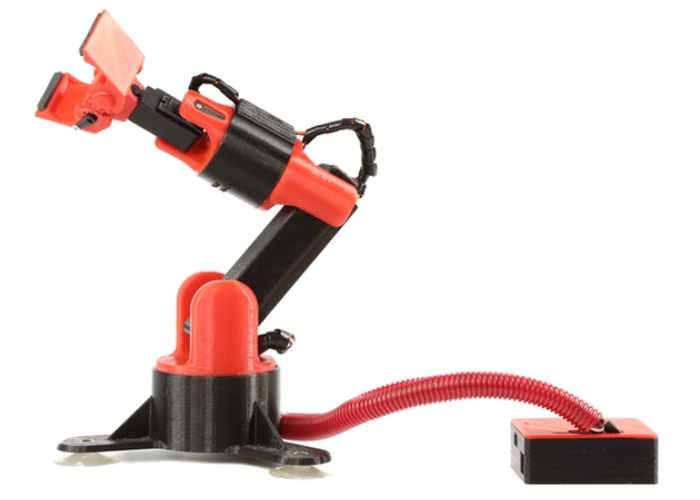 Arduino enthusiasts or those in education looking for an interactive way to teach the basics of robotics may be interested in a new Arduino robot arm which has been created by Slant Robotics and aptly named the LittleArm Big.

Watch the demonstration video below to learn more about the LittleArm Big Arduino robot arm which has been specifically created to provide a desktop robotic arm construction kit perfect for both hobbyists and educational establishments teaching any level.
Features of the Arduino robot arm include :

The development team at Slant Robotics explain a little more about the Arduino robotic arm and its inspiration as well as the companion application :

At Slant we have spent the last year or so working with robot arms for education. The best known of these is the LittleArm. But the LittleArm is small. As kids move forward with robotics the LittleArm does not have the capabilities to keep kids interested into high school and university. We had to create something larger with more potential for practical applications.

So we created the LittleArm Big. A Robot that is designed for upper-level education but has the potential to be used in practical settings, such as the Maker’s workbench or even in the home prepping toast in the morning. The LittleArm Big is a large-sized Arduino robot arm. It has been designed to be a desktop robot arm that is fun and even practical but also reliable as an educational tool in higher level robotics education.

We do not try and skimp on performance. All the servo motors in the arm are metal-geared. This allows for maximum strength, performance, and resilience. The servos give the arm a maximum lifting capacity of 0.25 pounds, fully extended. 3D printing allows the creation of strong, but incredibly lightweight components. Molding can’t match it. A 3D printer is also one of the most common maker tools, making the Big highly accessible.

If you are interested in building Arduino projects these may provide inspiration for your next project. Also if you enjoyed this article you are sure to enjoy how to build your very own Arduino wind speed meter or anemometer project which is easy to build with basic Arduino skills.