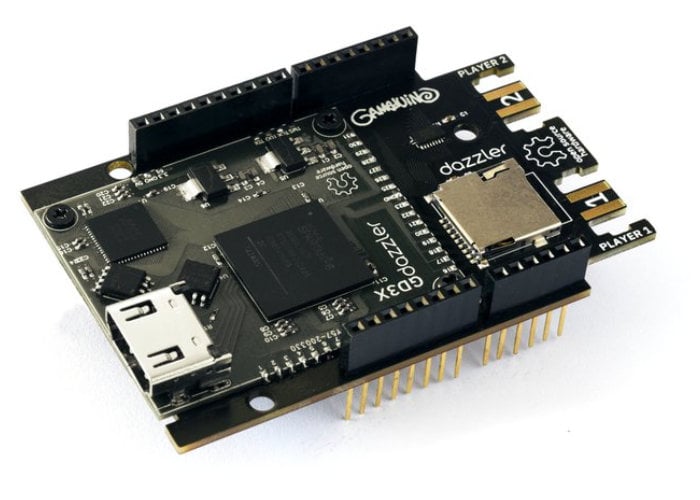 A new Arduino shield will soon be launching via the Crowd Supply website offering an easy way to add a wealth of features to your next Arduino gaming project. The small Gameduino 3X Dazzler Arduino shield is equipped with a GPU, FPGA, HDMI, and Python support for gaming and audiovisuals.

“The Gameduino 3X Dazzler is a totally open source, easy-to-use, and completely hackable audiovisual platform. Its unique combination of tightly-coupled GPU and FPGA opens up powerful possibilities, such as full 720p and sound over HDMI. The shield also has two Wii Classic ports for a plug-and-play game console.

The Dazzler is ideal for game designers using Arduino or CircuitPython, makers who want rich, responsive data and text visualizations, and perfectionists who want excellent video output for their Arduino project. As a truly open platform, the Dazzler can be anything you want it to be.”

Features of the Gameduino 3X Dazzler board include :

If you are interested in learning more about the Gameduino 3X Dazzler board and would like to be notified when the project becomes available on Crowd Supply jump over to the official logic page by following the link below to register your details.