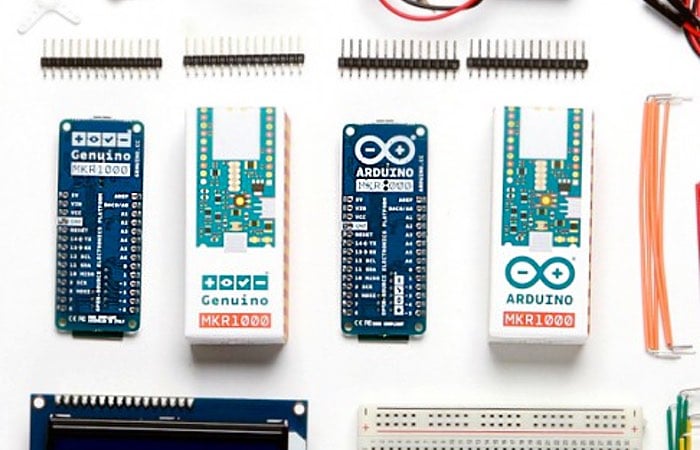 Over the weekend whilst the Arduino platform and makers and developers around the world were celebrating Arduino Day 2016, the Arduino foundation also announced the availability of the new Arduino MKR1000 and Genuino MKR1000 development boards, which are now available to purchase price that €31 or $35.

Specifications of the Arduino MKR1000 board as it is called in the US or the Genuino MKR1000 as it is branded outside of the US, includes a chipset that has been specifically designed for Internet of Things projects.

The Arduino Blog explains more about what you can expect from these tiny boards which are now available to purchase directly from Arduino resellers and from the official Arduino website.

MKR1000 is the protagonist of World’s largest Arduino Maker Challenge and was shipped exceptionally to 1000 winners of the contest. Now, this powerful board which combines the functionality of the Zero and the WiFi Shield, is available to all makers wanting to design IoT projects with minimal previous experience in networking.

Unlike most Arduino & Genuino boards, the MKR1000 runs at 3.3V. The maximum voltage that the I/O pins can tolerate is 3.3V. Applying voltages higher than 3.3V to any I/O pin could damage the board. While output to 5V digital devices is possible, bidirectional communication with 5V devices needs proper level shifting.

For more information on the new Arduino MKR1000 jump over to the official Arduino website for Full specifications and more details, as well as plenty of documentation to get you started creating Internet of Things projects. If you liked this you might also be interested in building an Arduino wind speed meter