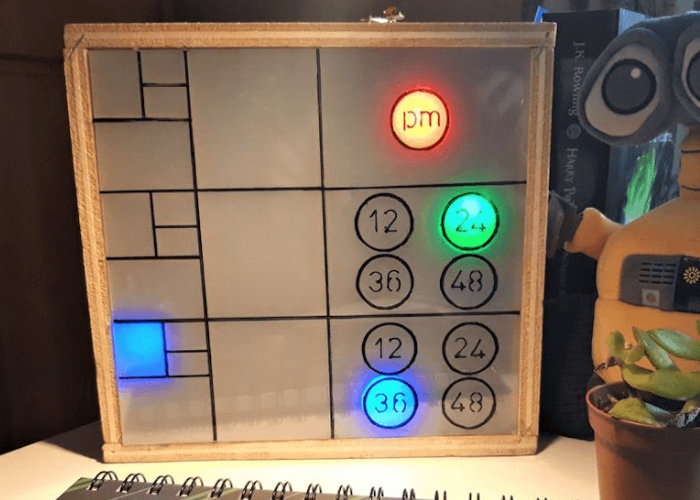 Makers and Arduino enthusiasts searching for a project to keep them busy this weekend may be interested in this awesome Arduino Fibonacci clock created by maker “TecnoProfesor”. may look a little complicated to read the time but once you know how to read it the Fibonacci clock is a great talking piece. Check out the video below to see it in action. Fibonacci was an Italian mathematician and created the Fibonacci sequence, a series of numbers that now bear his name.

“The original idea of this version of the Fibonacci Clock is not mine, it is an idea belonging to a friend, artmaker43. The concept here is that instead of using the conventional 1-12 to display the time, this device uses blocks corresponding to Fibonacci numbers 1-5, with circular icons adding increments of 12 for minute and second values.”

Features of the Fibonacci clock include:

– The clock is divided into three independents zones: hours, minutes and seconds that use the Fibonacci sequence (1,2,3,5) to simulate counting all the way to 12.
– In the minute and second zones we can find 4 labeled circles lighted by leds: 12, 24, 36 and 48 to indicate when the counting is greater than the ones
– In the hour zone we can find one labeled circle (PM) to indicate when the current hour is on the second 12-hour period (from noon to midnight).
– It uses three buttons mounted on the backside of the clock to set the hour or the minute.
– It uses a DS3231 I2C real-time clock with battery input to set and maintain the time.

Jump over to the TecnoProfesor Instructables project page for full details on how to build your very own Arduino Fibonacci clock.