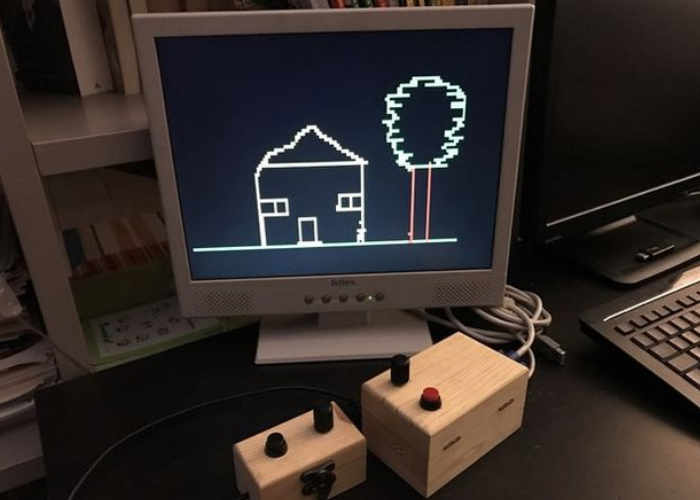 Rob Cai has used and Arduino Uno development Board together with an old VGA display to create an awesome digital representation of the iconic Etch-a-Sketch mechanical drawing toy invented by André Cassagnes.

The digital Arduino Etch-a-SketchConsists of a couple of wooden boxes which have been equipped with two potenziometers, two buttons, few resistors and a DSUB15 (VGA) connector together with a few lines of code. Check out the demonstration video below to learn more.

Cai explains a little more about the inspiration behind the Arduino Etch-a-Sketch project, and has kindly published step-by-step instructions to the Instructables website allowing you to create your very own if desired.

When I was a child I have spent a lot of time playing with “Etch a Sketch”, a classical game where you can draw sketches on a plastic board turning two wheels. Recently I realized that not only it can be reproduced in colors with an Arduino on a VGA monitor, but that I already have all the necessary hardware. All I need are few lines of code!

The hardware is indeed the same of my first Instructables: VGA Pong with Arduino Uno. The only needed components are two potenziometers, two buttons, few resistors and a DSUB15 (VGA) connector. As usual, no supporting IC or special shields! You can see it running on this video.

I used Arduino IDE 1.6.4. and the VGAx library done by Sandro Maffiodo aka Smaffer and publish on GitHub here. This library allows to use four color with a resolution of 120 x 60 pixels. One button is to clear the screen, the second to choose the color. One wheel moves the cursor horizontally and the other vertically. Sound is available too.