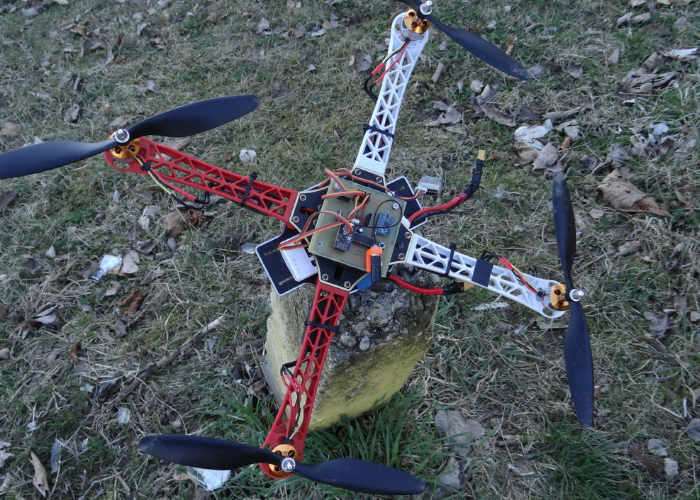 17-year-old master maker Nikodem Bartnik has published details of a DIY Arduino drone he has created using the Arduino hardware to act as his flight controller.

Nikodem has programmed the Arduino and 3D printed the Arduino drones frame although the one in the picture is a purchased drone frame which has been combined with a number of other components including four motors, four ESCs, some propellers, two nRF24L01 radio modules, an MPU-6050, a LiPo battery and other smaller components.

Watch the video below to learn more about this Arduino drone project which may in spy you to create your very own.

First thing that I bought was motors, ESC’s and battery from amazon. I live in Poland theres no amazon 🙁 So I asked my uncle to buy me those parts (thanks uncle). Then I designed my 3D printed frame and print out everything. Then I started prototyping I mount aruino uno with a breadboard on my frame connect MPU-6050 (this is gyroscope and accelerometer) and the best thing my “controller” 🙂 which was breadboard with potentiometer connected with 3 meters long cables to arduino uno on my quadcopter 😀 It looked pretty funny and it wasn’t very safe but it gave my posibility to test my drone fast with out dealing with radio yet.

After 9 months of building, breaking, experimenting it is finally ready. But it’s not a final version I still want to make some improvements, and I hope that you the makers will help me in it. I share all of those as open source so you can modify it, and do whatever you want (not for commercial use) remember to mention about my project somewhere.