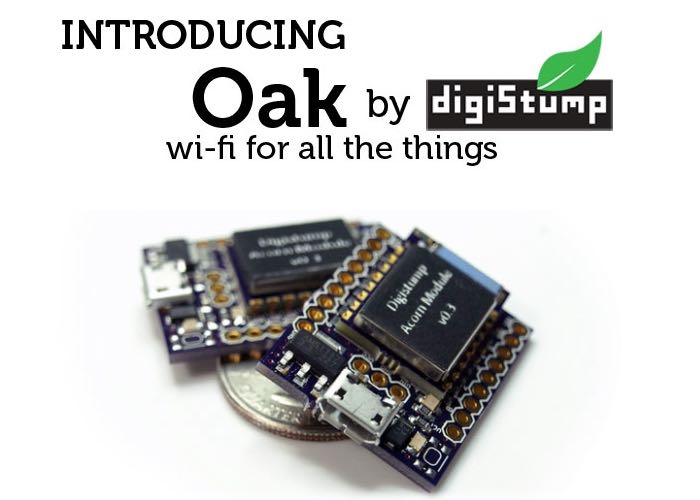 Digistump the development team that have created and launched a number of Kickstarter projects over the last few years earlier this month launch Oak a wireless development board that is Arduino compatible.

Oak is currently in the final hours of its Kickstarter campaign and has already raised more that six times its required pledge goal thanks to over 4,000 backers.

Oak is an Arduino compatible development board that offers access to the RootCloud and provides users with a 32-bit microprocessor that can be programmed wirelessly together with a REST API data cloud.

The Oak is also compatible with Blynk another Kickstarter project that was recently successful and allows you to program Arduino and Raspberry Pi systems using a smartphone application.

“Oak is a tiny Arduino Compatible development board with built-in Wi-Fi and a secure cloud-powered platform called RootCloud (online IDE, REST API, and Dashboard) which makes it easy to create cloud-connected electronic devices, projects, and products.

While the Oak is fully Arduino Compatible – it also has some serious performance: it uses a 32-bit microcontroller running at 80Mhz (overclockable to 160Mhz) which is contained in a custom Digistump made MCU and 802.11b/g/n WiFi module with awesome range and FCC/CE approval, 11 I/O pins, wide range voltage regulator, SPI, I2C, Uart, and more!

Now anyone can afford to build devices for the internet of things – put a Wi-Fi thermometer in every room! Wi-Fi toys! Wi-Fi toasters! Wi-Fi all the things!”

Jump over to the Kickstarter website for more details and to make a pledge.