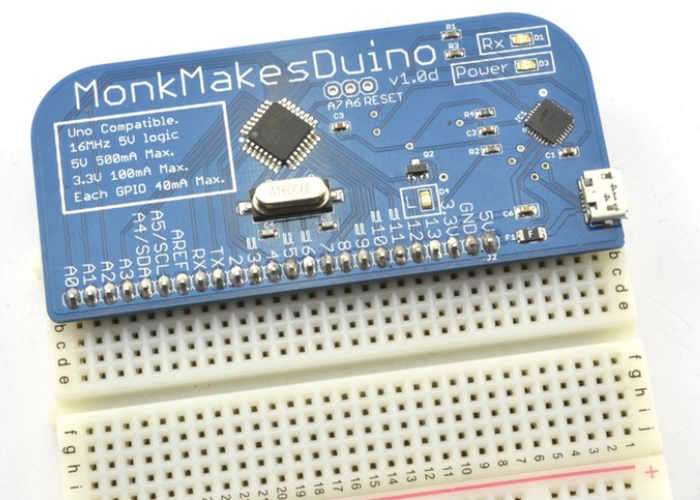 If you are looking to get started in programming electronics and especially the Arduino platform, you may be interested in a new beginner friendly Arduino compatible board which is being created by Simon Monk and takes the form of the aptly named MonkMakesDuino.

The MonkMakesDuino Arduino-based development board has been specifically designed for use with solder spread boards and is equipped with a row of single pins.

Watch the demonstration video below to learn more about this new Arduino-based development board which is taken to Kickstarter this week and has already raised the required funds to take the next step into production thanks to over 180 backers.

The idea for this board started with my need for a low-cost but good quality Arduino board with built-in USB to bundle with an Arduinio Kit to be part of MonkMakes range of electronic kits. Although there are several types of Arduino board that are breadboard friendly, such as the Arduino Nano and Arduino Pro Mini, I have never been totally satisfied with these boards, partly because of their relatively high cost, but also difficulty in identifying the pins. In the case of the Pro-Mini boards the need for a separate USB interface to program the boards is less than ideal for a beginner.

The MonkMakesDuino is the Arduino compatible board that I really needed but couldn’t buy. The single row of connections of the MonkMakesDuino means that it occupies most of the breadboard rows on one half of the board, leaving the other half free for the other supporting components. For example, connecting up a load of LEDs becomes really straightforward. The MonkMakesDuino is designed to neatly complement solderless breadboard both for the experienced hobbyist building projects and for anyone wanting to learn how to use Arduino (TM).

For more information on the new MonkMakesDuino board jump over to the Kickstarter website for details by following the link below.