Gamers looking for a littler more immersion into their first-person shooter (FPS) games might be interested in a new devices called the ARAIG.

The ARAIG is a force feedback exoskeleton which has been designed to vibratory sensory stimulation to the torso and upper arms, providing feedback when you are hit in game. Watch the video after the jump to learn more about the ARAIG project and see it in action. 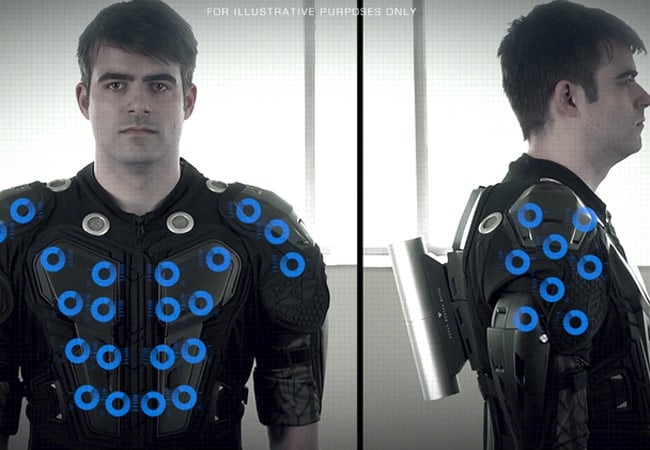 The creators of the ARAIG force feedback exoskeleton explain a little more about their ideas and concept.

“The design of ARAIG’s vibratory sensory stimulation is to give total torso and upper arm sensory coverage. By placing the vibratory sensors to cover the majority of the area it allows us to create localized vibrations anywhere on the torso and upper arm for an instant or over a period of time and in one location or simultaneously in multiple locations. Think of the different ways this would feel if you were hit by a single bullet from a sniper rifle, multiple bullets from an SMG or just the feeling of driving in a tank or vehicle.

Furthermore, by creating total coverage it gives developers the ability to alter the sensations that particular actions or weapons will create in their games. For example a high powered sniper rifle might create a very strong impact at one location; a plasma rifle might create an average impact at a particular location and then spread out across the body; a weapon might have a poisonous effect which slowly moves from one location of the body to the next and if you don’t stop it in time it could kill you; and even depending on health or shields in the game at a particular time the intensity may be more or less to let you know whether it just ricocheted off your armour or pierced through and hit something more vital.

Thus the vibratory sensations that ARAIG provides allows for complete coverage of sensations across the torso and upper arms to allow for a vast amount of sensations for developers to use to differentiate their products.”