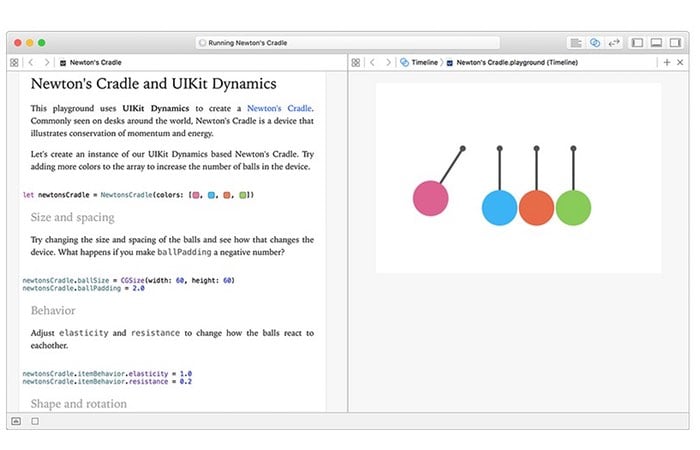 As well as rolling out a number of other beta versions for its iOS and OS X to developers, Apple has also today officially rolled out a new version of their Xcode development platform, taking it to Xcode 7.3 beta 3.

The new Xcode 7.3 beta 3 brings with it the highly anticipated Interactive Playgrounds for iOS and OS X developers to play with and learn swift and test out new code before rolling it out to their application.

The Xcode 7.3 beta 3 interactive playgrounds enable developers to click, drag, type, and otherwise interact with the user interfaces you code into your playground. Pictured above is an iOS playground that uses Apple’s UIKit Dynamics to create a fully-interactive and customisable Newton’s Cradle to entertain you. Apple explains more :

These interfaces react just as they would within a full application. Interactive playgrounds help you to quickly prototype and build your applications, and simply provide another great way to interact with your code.

Any view or view controller that is assigned to the liveView property of the XCPlaygroundPage is automatically made interactive, and since it runs within a playground you get all the usual playground results. You can experiment with gesture recognizers, see how UITableView creates and dequeues cells as you scroll, or interact with a complex 3D scene in SceneKit.

For more details and to download the Interactive Playgrounds Newton’s Cradle script that can be used in the new Xcode release jump over to the official Apple Developer website via the link below.