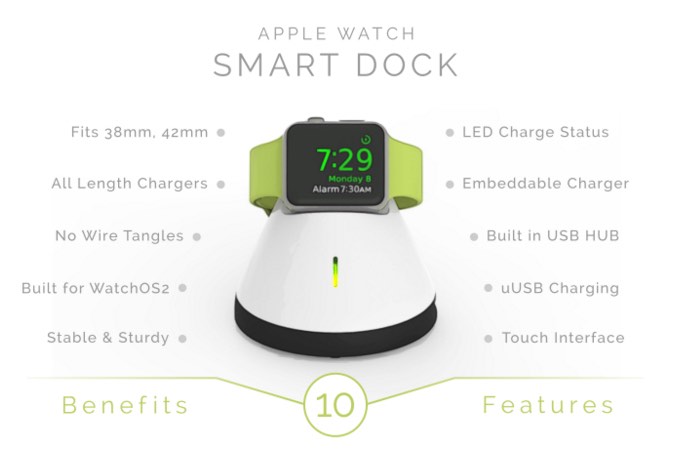 Apple Watch owners that are looking for a compact yet multifunctional way to charge their new Apple wrist worn wearable, may be interested in a new smart dock that has been created by Make Me Maker.

The company has launched their Apple Watch Smart Dock on Kickstarter this week to help raise the $120,000 it requires to go into production and create the tooling needs to form the stand. Watch the video below to learn more about the Apple Watch dock that is equipped with a capacitive touch interface and more.

The development team behind the Apple Watch Smart Dock explain more about the dock’s inspiration functionality :

When Apple Watch was launched last year, we were very excited about trying this cool new gadget! Therefore, in order to get our hands on it as soon as possible, we were among those crazy ones who ordered the watch early morning (3 AM) of April 10th. We have been using the watch for more than 6 months now and from day one we felt the need for a good sturdy charging dock for the watch. Without it, the watch fell countless times on the floor and in some cases scratched and worse broke the screen. Moreover, the 2 meter long charging cable was hard to manage and very often a good amount of time was spent untangling it.

So, that’s how our journey began in the search of a good dock for the Apple Watch. We looked through different docks available in the market but were unable to find the one that would fit all our needs. Majority of the docks in the market were physically unstable while others occupied too much space. Not only we decided to solve these problems, but we also wanted more, we wanted the dock to be SMART.

So if you think Apple Watch Smart Dock is something you could benefit from, visit the Kickstarter website now to make a pledge from $69 and help the Smart Dock become a reality.