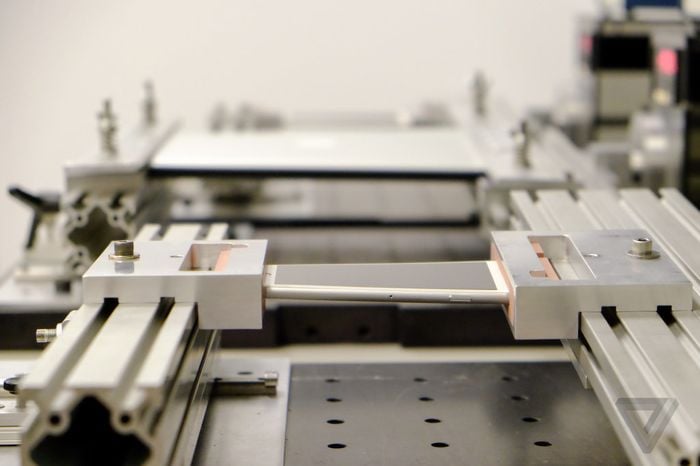 We have seen various videos of the new iPhone 6 and 6 Plus being torture tested, from being encased in liquid nitrogen, to being shot with sniper rifle.

Apple has its on testing facility where it tests out new devices for durability, and with all the new over the iPhone 6 Plus being bendable, Apple has decided to allow some journalists inside its testing facility.

The guys over at The Verge to go see inside Apple’s testing facility, and were able to snap photos of a number of machines that are used to test out the durability of the new iPhone handsets.

According to Apple, the new iPhone 6 is designed to be a tough handset, the company has apparently tested more than 30,000 units of the device in its facility for durability.

Apple tested 15,000 units of each model, and the company’s goal at the facility is to try and find a way to break the iPhone handsets before their customers do.

Head on over to The Verge at the link below for more details, photos and some videos of how Apple tests their new iPhone 6 handsets for durability.

It looks like Apple are trying to do everything they can to deal with the issue of the bending iPhone’s as soon as possible, the company said earlier that they have just received 9 complaints from customers about their device bending.

When Apple has issued with the antenna on their iPhone 4 handset back in 2010, it took them a while to respond to users concerns, it would appear that Apple has learn something from Antennagate.