Might as well have been carved on a slab of granite and planted somewhere to last forever. There’s a sizable poster that’s being circulate din print and across the web from Apple to mark their recently passed tenth anniversary. It has indeed been a hell of a ride, which is why the poster itself forsook any picture sin favor of an epic yarn of almost pseudo-biblical proportions. 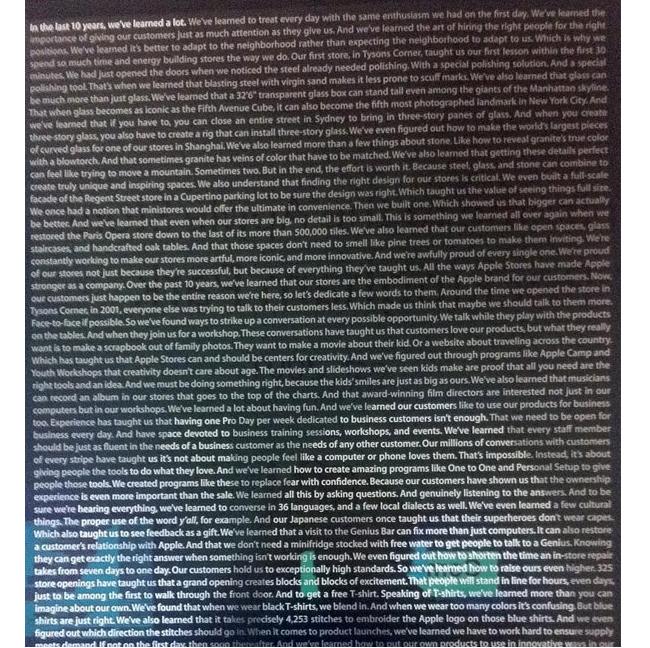 A few revelations from the opening salvo of wordage:

“In the last 10 years, we’ve learned a lot. We’ve learned to treat every day with the same enthusiasm we had on the first day.

Our first store, in Tysons Corner, taught us our first lesson within the first 30 minutes. We had just opened the doors when we noticed the steel already needed polishing. With a special polishing solution. And a special polishing tool. That’s when we learned that blasting steel with virgin sand makes it less prone to scuff marks.

We’ve also learned that glass can be much more than glass. We’ve learned that a 32’6″ transparent glass box can stand tall even among the giants of the Manhattan skyline. That when glass becomes as iconic as the Fifth Avenue Cube, it can also become the fifth most photographed landmark in New York City.”

The enormous chunk of narrative text above was originally devoid of indentation. We fixed it up a bit for ease-of-reading.