A new Apple Patent discovered by the Patently Apple website has unveiled a new method of sharing data between devices Apple has been working on that allows user to “pour” data from one device to another.

As expected from Apple its not going to just allow you to slide or bump devices together to transfer photos or data but is looking at something more funkier. As you can see from the image below the Patent covers a method of data transfer that uses the accelerometer and a pouring motion to tip images into one device from another as if under the influence of gravity. 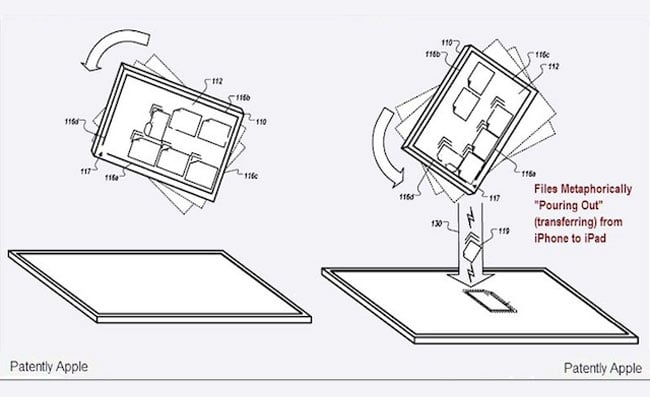 Apple’s patent FIG. 1B illustrates an iPhone (device 110) in motion relative to the iPad (device 120). Here, the user has rotated their iPhone above the iPad’s interface (122) in a manner similar to tipping a glass of water. This angular motion can be detected by one or more onboard motion sensors.

As shown in FIG. 1B, detached objects 114a-114d could be animated to simulate the effect of gravity by “sliding” toward the lowermost portion of interface 112 as device 110 is rotated. The animation of the objects creates the appearance that the objects have mass and are reacting to forces of a real world, physical environment. In FIG. 1C, we see that the iPad could interpret the rotation of the iPhone as a pouring motion as an indication of the user’s intent to transfer the files represented by selected objects 114a-114d.

As with all Patents the registering of one doesn’t necessarily mean a company will actually adopt the design or concept into their products.But its interesting and refreshing to see Apple is still thinking out of the box when it comes to next generation features.