Thanks to an anonymous tipster the guys at Engadget have just leaked a pic of the new MacBook Air’s innards. 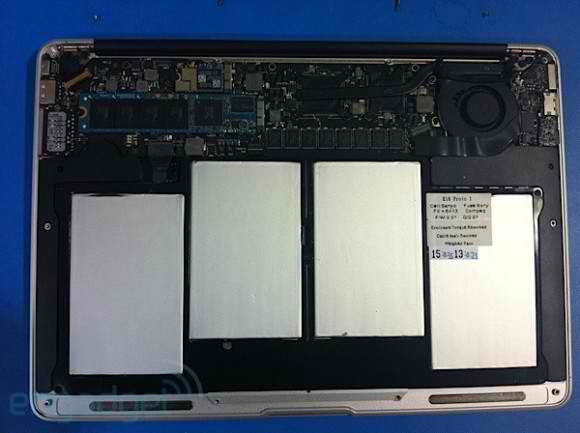 Judging by the photographic evidence, we’re looking at extra battery room and a 13.3-inch display. Scratch a hard drive or SSD though since Apple is rumored to have an SSD card with solid state storage in store for its faithful. Other specs include left and right USB plugs plus an SD card reader. On the aesthetic front, the upcoming MacBook Air will sport unibody style and a screen that’s the same as the current MacBook. In not so many words, like most new Apple products, the changes here aren’t that big a surprise.

Throw in an SL9400 processor—the same used on existing models—and word that what we’re looking at is a prototype dating back to April 2010, meaning the real new MacBook may yet leave us drooling to get one.

But alas, nothing is final and there’s also rampant speculation that an 11-inch frame is what’s going to be showcased during the “Back To The Mac” event scheduled for next week.